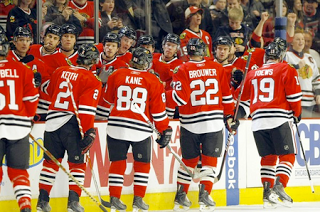 The Future is now for the young and talented Blackhawks.

by Henry Whitfield
As a die-hard Toronto Maple Leaf fan (havent made the playoffs in 5 seasons), and season ticket holder for the Halifax Mooseheads (last in the QMJHL for the past two seasons), I am used to disappointments.
The third round of the playoffs took that to a whole new level.

I chose to jump on the bandwagons of both the Montreal Canadiens and the San Jose Sharks only to be rewarded with two lopsided series – going in favour of the other team.

The San Jose Sharks got swept in convincing fashion by the Chicago Blackhawks, a demise I predicted last round here against the Detroit Redwings, but obviously the hockey Gods just wanted to torture me some more. They never really competed and I’d be surprised if Evgeni Nabakov ever plays another game for the Sharks. The question remains if the Sharks will gut their top line and trade the ‘big name players’ who are constant no-shows in the playoffs.

The Cinderella story had to end sometime; too bad it shattered after I picked the Canadiens to win this series.

Jaroslav Halak had been the goaltending standout in the 2010 playoffs until Michael Leighton swiftly stole that title with three shutouts against the Canadiens. While he put up a brick wall on the backend, his scorers went to work booking a place in the Stanley Cup finals for a team that didn’t make the playoffs until the last day of the regular season.

I genuinely felt bad for the Habs as they looked physically exhausted out there against the Flyers, who threw their body around and made their presence felt. After beating two of the best teams in the league, Washington and Pittsburgh, it didn’t seem that the Canadiens had any gas left in the tank and they were never really in this series.

My Pick: Montreal In 6

MVP Of The Round – Michael Leighton stole this and ran away with it. He posted three shutouts against the Habs, and has quickly shown that the Flyers backup goalie can get it done. We’ll wait and see if he can get it done against the high-powered Chicago offence, but for now I’ll let him enjoy his MVP performance.

The No Show – I was going to say the Habs entire roster, but they won a game, so clearly for the second time this series it is a tie between Marleau, Thorton and Heatley. Where were you guys? Pavelski didn’t pick up the slack and the Sharks got swept. I feel a change is coming in San Jose and a real shake up needs to happen.

Most Goals – Even though his team is out, Michael Cammalleri still leads with 13 goals, that are four better than the next best total.

Most Assists – Jonathan Toews continued his offensive success this post season and leads with 19 assists in these playoffs.

Most Points – Jonathan Toews also leads the overall points with 26 points, which is five better than Flyers Captain Mike Richards who sits at 21 points.

Henry Whitfield lives in Halifax and is an avid sports fan who covers everything and anything in the sports world, while focusing on hockey and football. Follow him on twitter @HenryWhitfield.