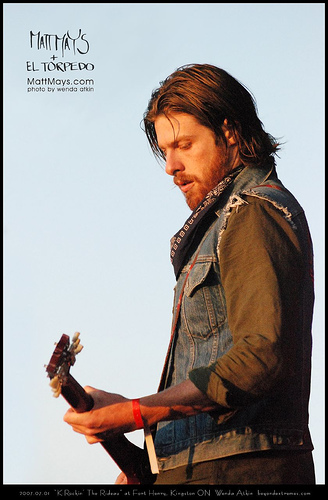 Last we met I was gushing over a new found musical amour in Mumford and Sons. I’ve since listened to the whole album and I’m afraid I have to take it back. They’re a couple-a songs wonder for me, and I’m a little sad about it. I wanted to love them, I really did.

Trouble is, all the songs sound the same and the lyrics come off as thesaurus dependent. What do I know, I suppose. Maybe that’s how they talk in Angleterre. To me their sound is a tad inauthentic. Same rising emotions, same harmonies, same smug folkiness.
Can’t win ’em all, I suppose. I still like the Little Lion Man song, just not the whole package.
Growing up I didn’t go to a lot of concerts; pretty sure I didn’t go to any, actually. There wasn’t a whole lot happening in Pictou County but that’s no excuse. The real trouble is I was more into Antonin Dvorak than Eddie Veder and missed a lot of what the 90’s had to offer. First CD I bought was the Pocahontas soundtrack, which says a lot, really.
Fortunately, things have changed in the past year or two and I’ve experienced more live music. First for 2010 was the Halifax for Haiti concert (completely amazing). Then a couple of months ago I won tickets to Metric and just last night I enjoyed a little Matt Mays at the Fleet Club.
The Metric show was just a few days before their big Juno wins and Matt Mays was performing before a small crowd of apparently devoted fans. I’ll definitely have to see him again since the folks I went with weren’t the adventurous sort and spent the night seated and sober.
Some other names on my must-see list would be Hawksley Workman, Rufus Wainwright (although this note on the tour date list is… I dunno, weird?), Deep Dark Woods, Old Man Luedecke, etc. etc. Point is, I plan to take in a lot more shows than I have traditionally so here’s hoping for a very musical second half of 2010.