Let me tell you the tale of an awesome nail polish 🙂 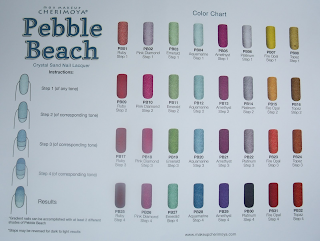 Once upon a time, there were Max Makeup Cherimoya Pebble Beach Crystal Sand nail lacquers who secretly lived in a far far away land, so secret that not many people have seen them except for Carolina over at Colores de Carol. The pic on the left is their family tree, as Carolina captured it 🙂
They are the awesome creatures that come out at night to make gradient colours on people’s nails. They travel in 4’s, 8 families in total. One gradient look at a time, they do their job so well that every woman whose life was touched by them is in love. The world is just beautiful with them around.
Extreme luck was when I came across a bunch of them hanging out in my ‘hood. A brave one came over to say hi, and we became bff forever! Wanna meet her? 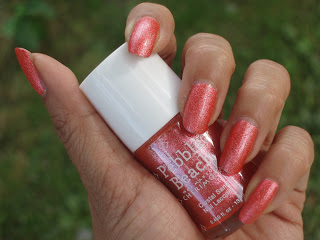 This is Cherimoya Pebble Beach Crystal Sand nail polish in Fire Opal Step 3, in the shade, no flash. Don’t know if my pics would do her any justice, so I’ll describe her more for you.
Her appearance: Fire Opal Step 3 is a pinky coral head. She is matte and metallic at the same time. She dried super fast on the nail, leaving a slight grainy feeling, more like a larger glitter feel than sandy. I didn’t add a top coat here so you can see her in true form, the crystal sand texture didn’t bother me at all. 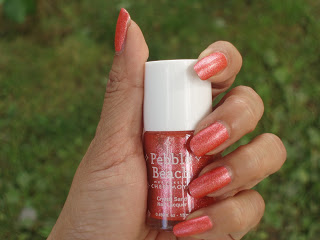 Her aura: she was opaque in one coat, one easy peasy coat! And get this: she did not flake away within a day like most of the matte ones out there. She hung out with me for two days before letting one of my pretties to replace her. I never met anyone like her and she’ll hold the bff status in my book for a long time.
Another angle of Fire Opal Step 3, still in the shade. She appeared a little lighter here, just purely some light effects. The sun was setting when we met, I managed to take a few quick pics of her for you. 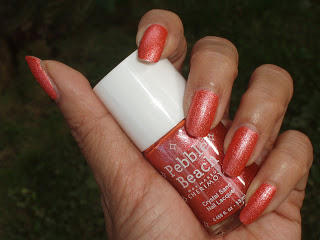 And with the glorious sunshine. The sun brings out the shimmers in her, and the shade hardly looks matte anymore. Click the pic to enlarge, cause you will want to. Magical!
The Pebble Beach is of average size (0.459oz/ 13ml), about twice as big as the Joe Fresh pretties. The cost to have your bff stay with you forever is merely $2.99. According to the Cherimoya master, the creatures are 3 Big Free (No Formaldehyde, Toluene and DBP).
I did not feature the other sisters of Fire Opal Step 3, for a few reasons. Their group of 4 for some reason was not all there when I met her, and I enjoy her a lot just by herself. I already went back to find her a friend from another family. Diversity is key 🙂 Stay tuned….!