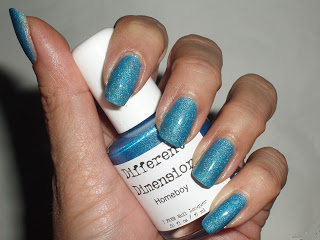 It has been a long while, but here is my second try of Different Dimension’s 80’s Baby collection. If you missed it, the first NOTD from the brand was Gnarly, the green.

This is Homeboy, the blue 🙂 Fair to say that I love it even more than I did Gnarly. It has more to do with the colour and how it makes me feel than with the holographic strength, as the two shades have about the same level of holo effect.

The demo pic of Homeboy on Different Dimension’s etsy page showed a dark navy blue, but they did note at the time I bought the set that the official colour would be a lot lighter. You know me, I prefer a darker blue, but this blue will still do 🙂 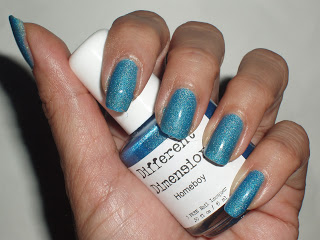 It is a beauty, isn’t it? Homeboy cheered me up through the freezing weather we have been having, and oh don’t I need some cheering up?

If you say I’m artificial for saying that, I’ll take it, as nail polish (and makeup) means different things to different people. I’m all for finding an outlet for our emotional feelings, and if it happens to be Homeboy or some other pretty nail polish, I’m totally fine with that.

Anyway, to be fair to Homeboy, I wouldn’t compare it to the well known China Glaze OMGs as it was made to be scattered holo and that’s what it is. 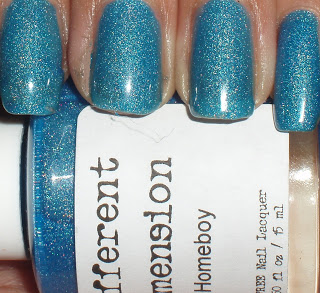 One more look at it? Sure, here it is, up close. A bit of tip wear there, as this is second day nail.

Similar to Gnarly, Homeboy lasted about two days on me and I had a split on my index nail at the end of it. Hate when that happens.

Anyway, I am home with family but it’s hard to say when or how jetlag would hit me until it does. There won’t be Weekly flyer deal post for a while, but you’ll understand, right? 🙂

I hope my American friends are ready to spend quality time with loved ones over Thanksgiving. It looks like Black Friday sales are getting crazier in Canada every year. Shop without me, but do tell.