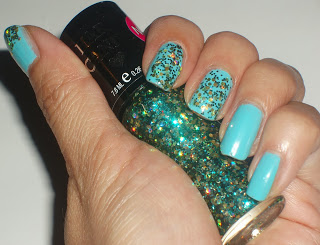 It is craziness time on the nails again, it’s Hard Candy Emerald’s Eve from the Fall release.

It is an awesome combination of gold, aqua blue/ green and holographic glitters in a clear base.

In most pics, the holo effect did not show up well, but it is there and gives a lot more depth to the mani. Not really a typical colour theme for fall, but the combination was just too crazy that I wanted to see it on the nails ASAP.

Again, I wish the base were tinted and opaque enough to wear without a colour base, as I am too lazy to layer, most of the time. The glitters are quite dense, I did some dabbing all over with the first coat and went for an extra coat on bald spots. 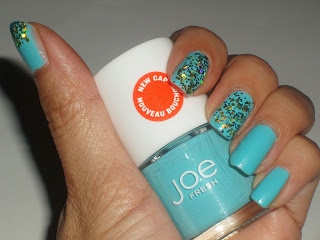 Still on the aqua blue theme, I chose Joe Fresh Aqua, also a Fall release, as base. It needed two coats, and it was beautiful. I don’t remember if I had something like it in the stash.

Now I wanted Emerald’s Eve and Aqua together in one bottle, can it be done, brands? Had anyone done glitters in a cream base, or even better, a duochrome?

I might be asking too much, but I want to dream far ahead. While looking at the beautiful shelf of Joe Fresh nail polish, I felt like they have done almost every colour under the sun, so I’d love to see them branch out to different finishes beside cream. 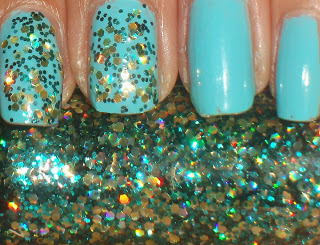 Closeup look at the glitters, they almost look like fish scales on a mermaid’s tail, don’t you agree?

How have you guys been? My life has got so busy, the first thing I think of every morning is what I have to do for the day and hope I wouldn’t forget anything. And even with getting up earlier than before, I still find the day goes by in a blur.

Busy calendar at work, combined with Squirt’s school schedule and other activities…, I start feeling like a machine, even with makeup, which is not good. I need to slow down, if only life lets me.