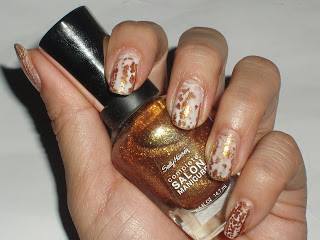 Another run of Layla Bubbly Effect in Meringue Pie, since it has been a while 🙂 This time, the base is the gorgeous Sally Hansen Salon Complete in Gilded Lily.

This shade was from the Sally Hansen (LE) Fashion Week (Prabal Gurung) collection, released in the US Fall 2012. I found it in a random display at Superstore one time and couldn’t get pass how pretty it was, a foiled old gold with crazy gold flecks.

I used 2 coats of Gilded Lily here and one thin coat of Meringue Pie. 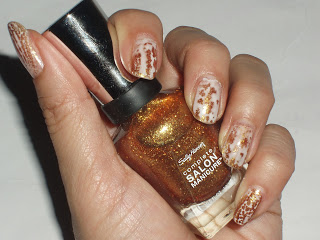 The more I try Layla Bubbly Effects, the more I found that they resemble the look of the saran wrap technique. So it is the lazy and less messy option for those who want to experiment nail art.

With Meringue Pie being white, it would be more intense on top of darker colours like black or dark red. But I really like how it turned out on top of this intense warm gold too.

The only thing with Bubble Effects is you can’t tell what effect you are going to get until you put them on. I tried to be consistent, but as you can see here, Meringue Pie appeared more spotted on my pinky, compared to the other fingers. 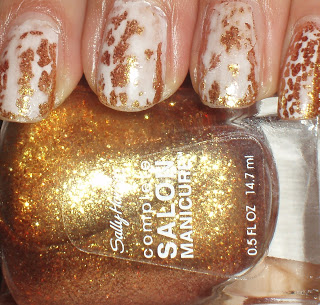 It is raining like crazy today. I am nervous for Squirt’s first day of school tomorrow. She’s all excited to see her friends, but me, it doesn’t get better no matter how many years she has been in school. She tried on the “first day outfit” last night and I wanted to cry. She looked so mature as a fifth grader, but I didn’t want her to. Why do they have to grow so fast?

Well, other than that, we had a nice relaxing long weekend. The blueberry picking trip didn’t happen because of car problem, but we happily stayed in. How did your weekend go?