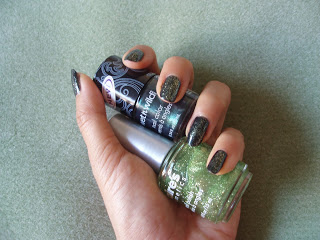 The collection was supposed to be at selected Walmart Canada September 1. It was spotted in Toronto before September, but here, no sign of it at all 🙁

I was lucky to receive 4 shades from my US swap. Morbid, the black shade with light green/blue shimmer, stands out the most in the collection.

I have never had black on my nails ever, was probably not brave enough to pull it off. But I think Morbid deserves to be “featured” first. 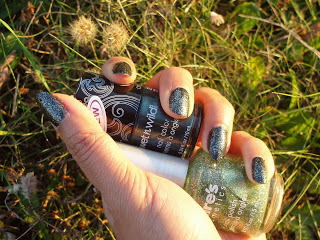 As it is the weekend, I brought the polish up a notch by adding one coat of Claire’s Go Green (a green glitter) on top.

The second picture is taken in sunlight, just to show the sparkles. With the fine glitters added, Morbid doesn’t look too black anymore 🙂

Talking about black, the talented Lacquer Laine found a dupe for the famous Essie Starry Starry Night: LA Colors Silver Glitter on top of WetnWild Nocturnal. If any of you have the 2 colours, try them out together and let me know what you think.

We were supposed to go camping but didn’t book the camp site early enough and it’s a long weekend. So yep, we’re stuck in the city. Anything fun you guys are doing this weekend?