The humble oatcake is a fixture in Halifax coffee shops and is most excellent when paired with a coffee and an afternoon of blogging – or whatever one does.

The oatcake comes to us from Scotland, likely introduced by Scottish settlers as early as 1773 when the ship Hector landed in Pictou with its 189 Gaelic speaking Highlanders. The Maritimes would see massive immigration from Scotland, particularly in Prince Edward Island, Cape Breton, Pictou County and Antigonish. The Scots would become one of the largest ethnic groups of Nova Scotia.

It is “New Scotland” after all.

Oatcakes have been a mainstay of Scotland for hundreds of years, oats being the staple grain of Northern Scotland (i.e. one of the only things that would grow there). It is said that Scottish warriors would wear a pouch (sporran) filled with oats, which they would mix with water and cook over the fire. For much of history, the oatcake was eaten with every meal as the standard carbohydrate, whether cooked on a griddle or baked on a pan and eaten as rounds or farls.

My grandmother immigrated to Canada in her early 20’s after meeting a Canadian sailor stationed near her home in Scotland during WWII. My grandmother introduced me to the Scottish oatcake, serving them as one would crackers with cheese. Brands like Walker’s or Nairn’s are popular, the latter of which I routinely pick up at Pete’s Frootique.

Interestingly, in England there are varieties of oatcake such as the Staffordshire Oatcake, which is a type of savoury pancake made from oatmeal, flour and yeast and commonly eaten with breakfast stuffs.

Now, the Nova Scotian oatcake is an entirely different animal. It is not a savoury cracker or pancake, but rather a sweet biscuit or cake. Cooking With Craic has a good blog post on the topic of Scottish vs. Nova Scotian oatcakes, including a recipe. The main thing to remember is that oatcakes in Nova Scotia have sugar added.

There are generally two styles of oatcakes in Nova Scotia which I will call Cape Breton-style and Halifax-style.

Cape Breton-style oatcakes tend to be thin and crunchy. They are commonly eaten with tea, topped with butter, jam or cheese. You can find them at roadside cafe/bakeries along the Cabot Trail and they make great road trip snacks!

Halifax-style oatcakes are the size of hockey pucks; they are thick, hearty, soft and chewy, often dipped in chocolate or infused with peanut butter. They make for a good breakfast/snack with coffee.

Here is a theoretical route you could drive around the province with notable oatcake stops. It begins on the Cabot Trail in Cape Breton, ventures into the South Shore and ends up in good ‘ol Halifax.

Please note that some of these places are open seasonally.

If you are starting your day in Baddeck (10min drive) or travelling clockwise around the Cabot Trail from Sydney (1hr drive), the Herring Choke Deli will be a great first stop. Located just off the Cabot Trail (and very close to Big Spruce Brewery!) this deli/bakery has solid sandwiches for all your road trip needs. The oatcakes here are very much Cape Breton-style, and similar to stop #2. 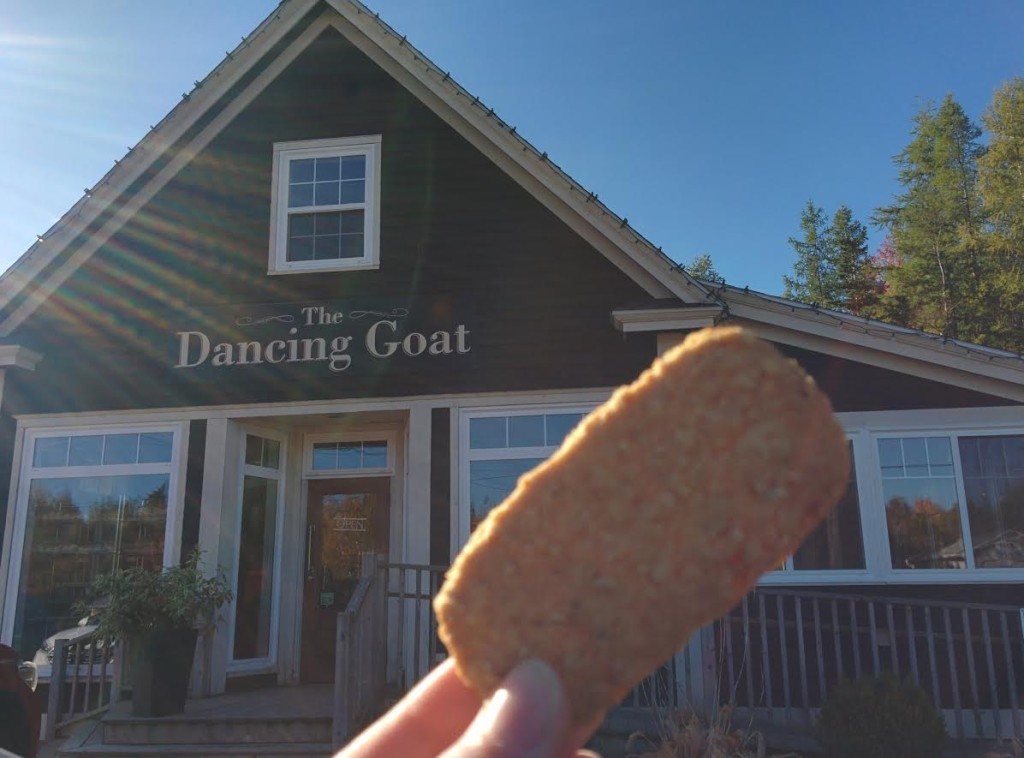 The Dancing Goat is a roadside cafe on the Cabot Trail that is known for its “Goat Cakes”. These are characteristic of what I call “Cape Breton-style”. Load up on these and some coffee for the road. 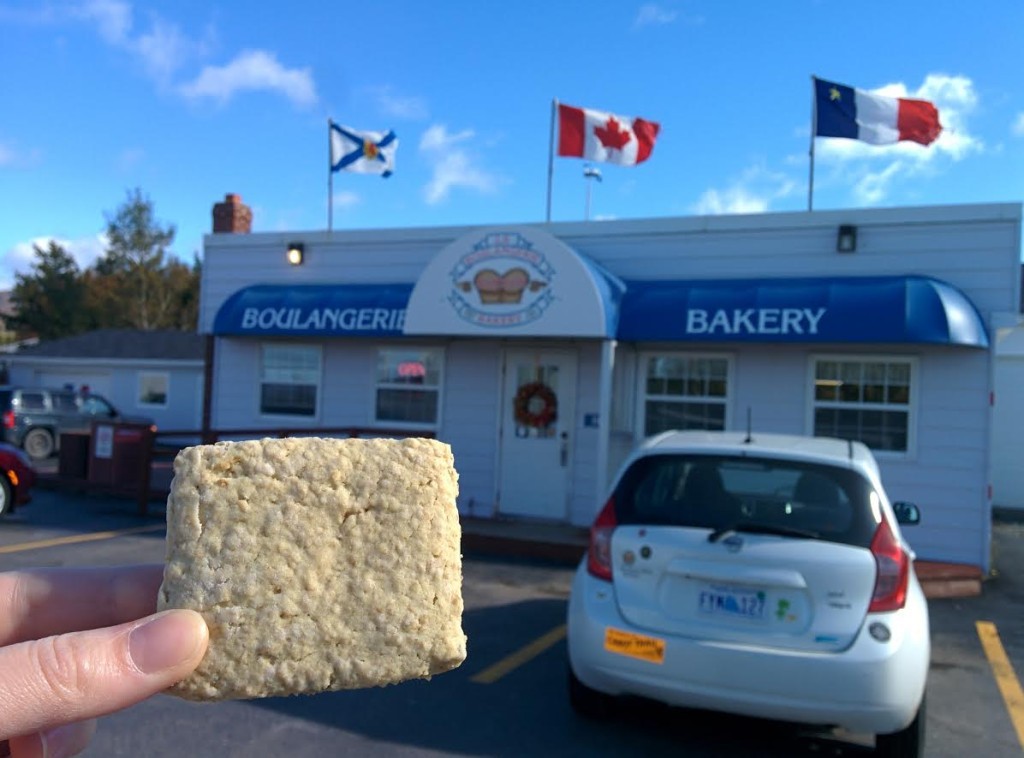 Just before you enter Cape Breton Highlands National Park, you will pass through the seaside Acadian town of Cheticamp. We loved the oatcakes at Aucoin Bakery. These were more soft ‘n chewy than their Scottish counterparts. Make sure to ask for other Cape Breton curiosities while you’re here: “pork” (read: “date”) pies and jam jams. 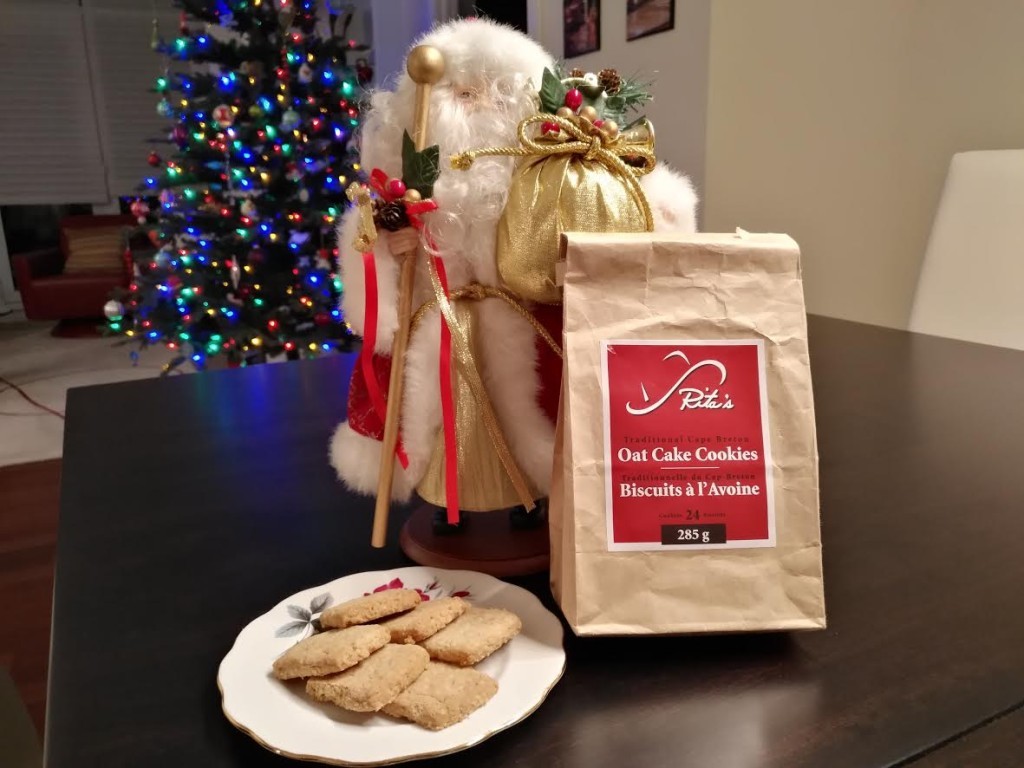 Rita’s Tea Room was opened in honour of famous Cape Breton singer, Rita MacNeil, in the converted one-room schoolhouse where she lived for several years, hosting many teas.  I was gifted a bag of these “oat cake cookies” by a resident of my building this Christmas.

These are small squares of crunchy, sweet, buttery goodness. Highly addictive! If you can’t visit the tea house itself, you can order these online. 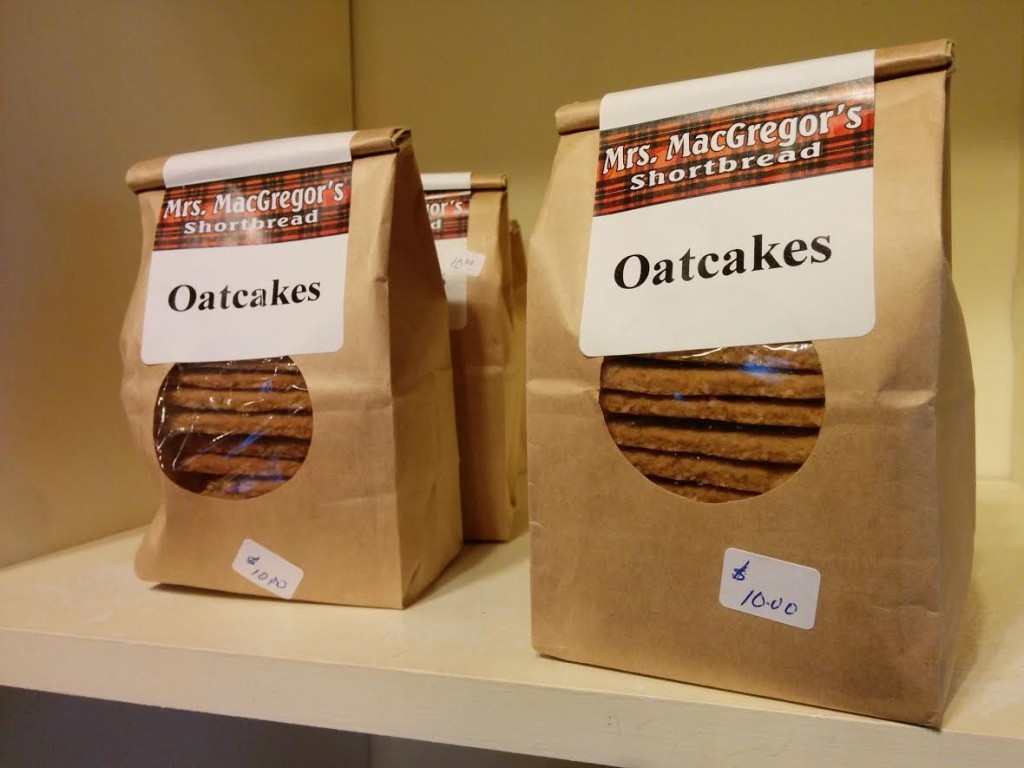 Mrs. MacGregor’s specializes in Scottish shortbread but also makes these Cape Breton-style oatcakes. I found these for sale at Glenora Distillery in Mabou but there are a host of retailers that sell them. Of course, I recommend you visit the storefront itself. Pictou is a slight detour on your way to/from Cape Breton and a neat town to visit (there is even a replica of the ship Hector), and Mrs. MacGregor’s shortbreads are simply tantalizing. 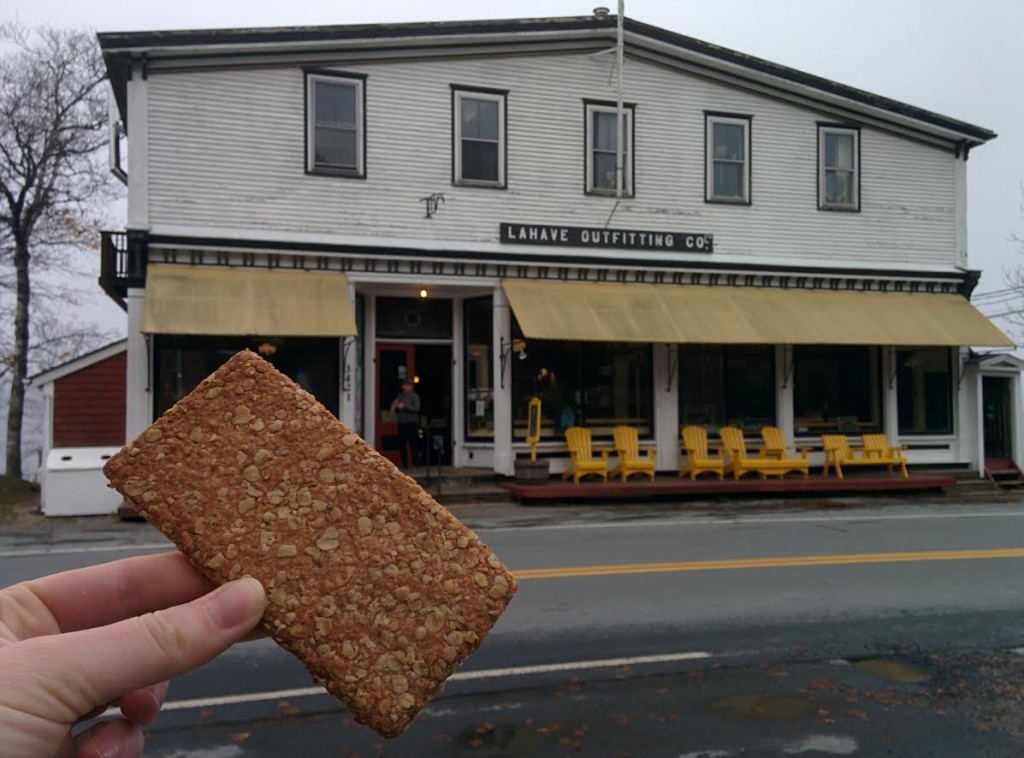 The LaHave Bakery is a must if you are venturing to the “other side of the river” after a day in Lunenburg. Take the ferry across the LaHave River and you will immediately approach the old building which also houses Homegrown Skateboards and Craft Co-Op. Wednesday is “Oatcake Day” when the oatcakes are freshly baked. There are lots of other treats including espresso coffee drinks, paninis and mini pizzas. Swing by to get some lunch or a snack to enjoy at one of the area’s fantastic beaches.

A most descriptive account of the LaHave Bakery and its oatcakes can be found at the blog: A Canadian Foodie.

I didn’t get a chance to try these myself (despite growing up in Mahone Bay) but I heard they were good and I will vouch for Jo-Ann’s Bakery. It is a produce market/bakery with deli sandwiches and ice cream. Jo-Ann’s is open seasonally from the May long weekend to the last weekend of October. 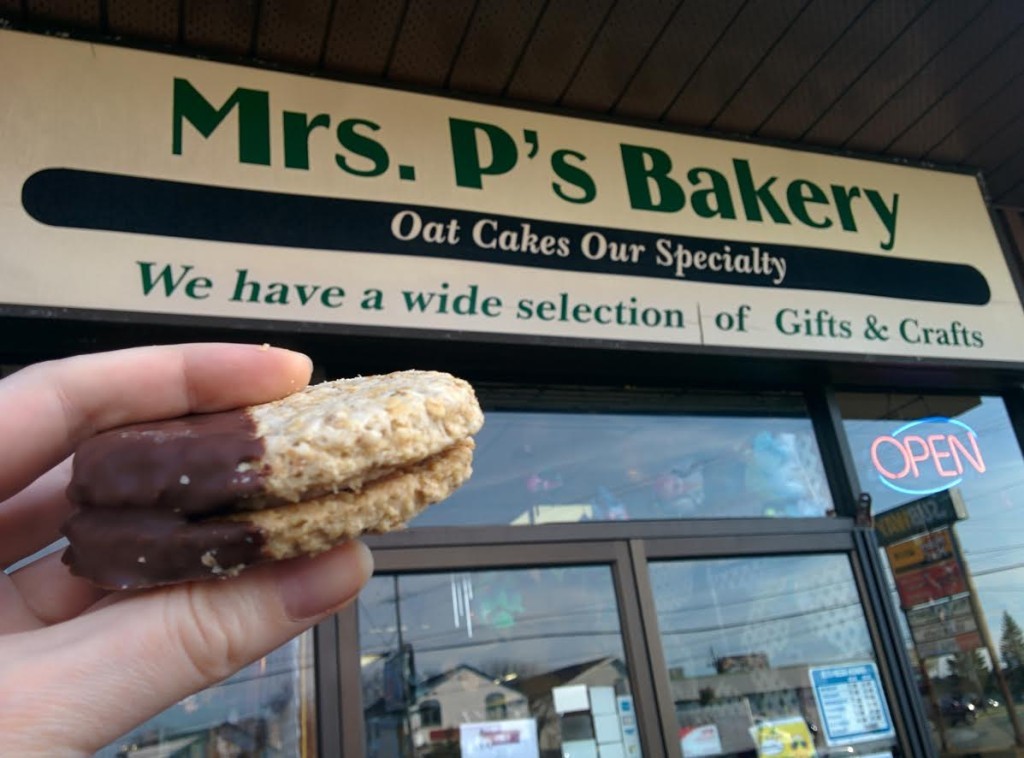 Marilyn Royston worked many food industry jobs, including a bakery on Spring Garden Road where her oatcake recipe gained popularity. But she was 50 years old before the demand for her oatcakes prompted her to go independent, opening her store on Herring Cove Road. That was over 25 years ago. 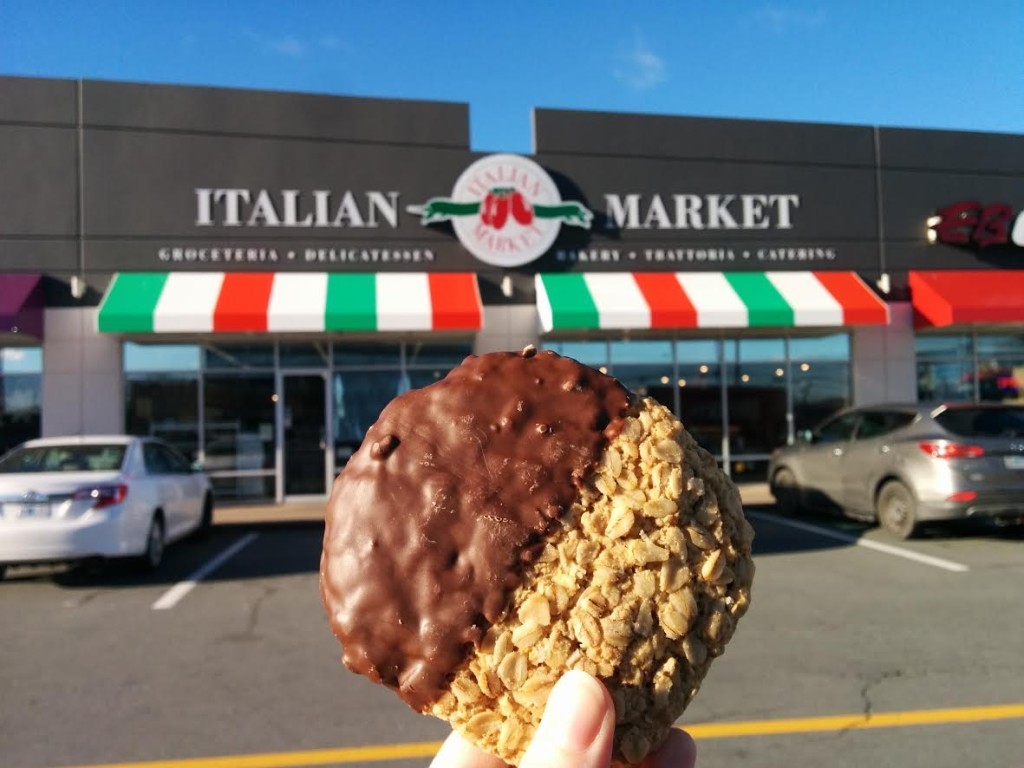 The Italian Market actually makes my all time favourite oatcake, despite not being particularly Scottish. I have fond memories of grabbing one at Video Difference (R.I.P.) to accompany a movie marathon. These are the thickest, meatiest oatcakes I’ve ever had. They truly embody the whole concept of the Halifax-style oatcake, with the most satisfying chew and sure to fill your belly. Choose from original, chocolate dipped or peanut butter. All good. 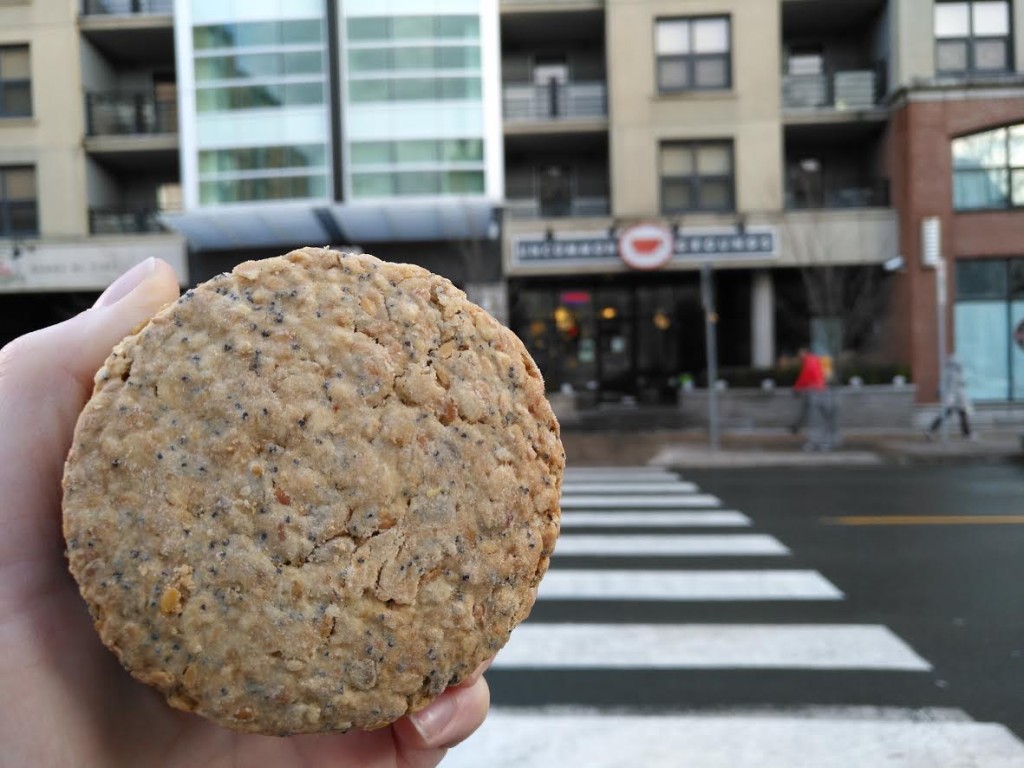 For something a little different, try the seeded oatcakes at Uncommon Grounds. These are packed with poppyseeds, flax seeds and sunflower seeds for a unique texture and flavour experience. These oatcakes are thick, soft and chewy – just the way I like ’em. 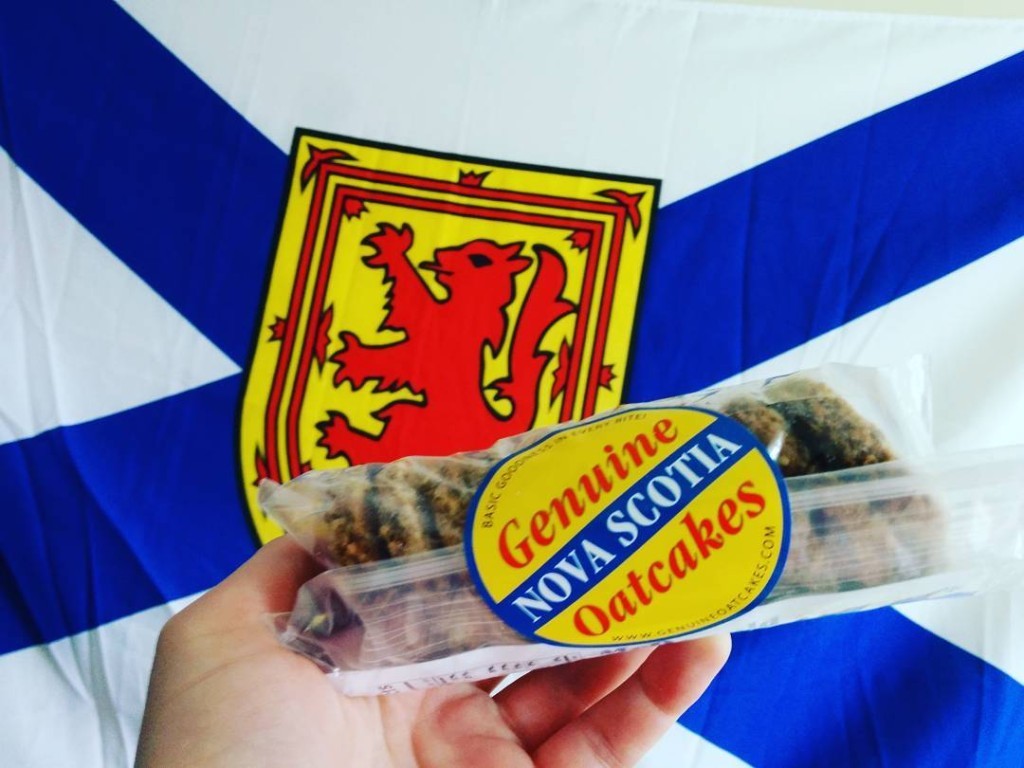 Ken Wallace became fascinated with oatcakes when he moved to Nova Scotia from Ontario over 30 years ago. After several decades of practice and experimentation, he decided to start selling his hand-made oatcakes in 2014. His Genuine Nova Scotia Oatcakes are bite sized, and made from quality, local ingredients like organic Speerville oats, Nova Scotia honey. berries and maple syrup.

I’m in love with Genuine’s ginger oatcakes, which are only available seasonally as they are made with organic ginger from the Annapolis Valley – I found them at the Seaport Market around Christmas time.

Here is a list of vendors and other ways to get your hands on these tasty morsels. 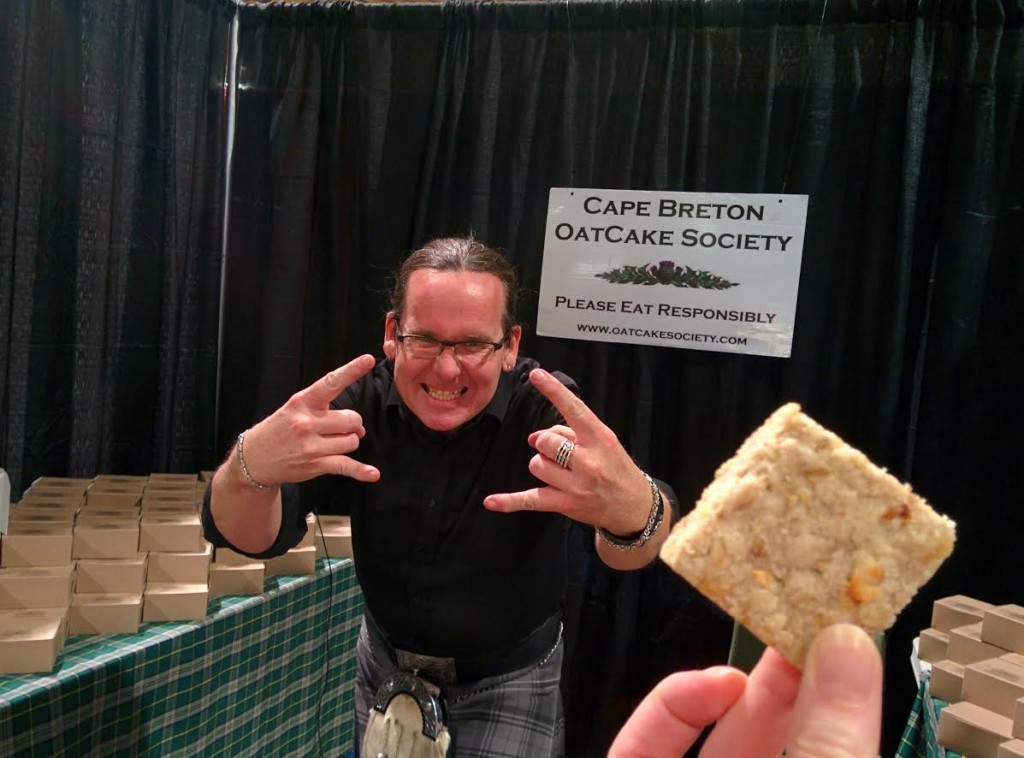 The Cape Breton Oatcake Society is a company in Saint John founded by Greg (the guy in the kilt) who is originally from Cape Breton (where his oatcake recipe originates). He has deviated from the original family recipe by substituting butter with organic canola oil, making his oatcakes 100% vegan.

Greg’s oatcakes are mainly sold in the Saint John area but they have made appearances at The Plaid Place and I found Greg most recently at the DAL Christmas Market. You can also order them online.

These oatcakes are sold by the box in a whole bunch of flavours, from original to chocolate bar infusions. They are small thick squares, on the soft side of the oatcake texture spectrum. I was lucky enough to get a sample box which included some seasonal/occasional varieties like candy cane (my fav!) and chili chocolate.

Where is your favourite oatcake? Did I miss anything? Comment below and make sure to check out the rest of my Nova Scotia Food Profiles Series!