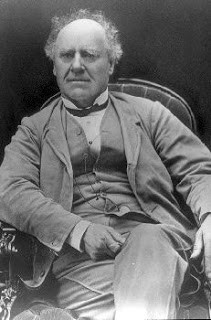 This year on Heritage Day, Nova Scotia honours Joseph Howe. Born in 1804 in Halifax, Howe served as a journalist, politician, premier and lieutenant-governor of Nova Scotia before his death in 1873.  Although Howe is perhaps most known across Canada for trying to keep Nova Scotia out of Confederation, he contributed to the creation of many local institutions like the Halifax Public Gardens, and promoted local authors like Thomas Chandler Haliburton in his newspaper, The Novascotian. Howe was a colourful character who could convince almost anybody of his way of thinking: the Canadian Encyclopedia claims that Howe “could use his oratorical powers to influence his compatriots as no other man has ever done.”

Today, Howe’s most enduring legacy is as a defender of free speech. In 1835, Howe was accused of criminal libel against local magistrates after he accused them of swindling Nova Scotia’s citizens out of 30,000 pounds. After spending two days vigorously pleading his own defense he was swiftly acquitted of wrongdoing and thus proclaimed “the press of Nova Scotia is free”.  Dictionary of Canadian Biography.

John Ralston Saul‘s Joseph Howe & the Battle for Freedom of Speech is based on a lecture Saul delivered at King’s College School of Journalism in Halifax in 2004. Saul suggests that Howe’s fight to expose government corruption through his newspaper contributed to a distinctly Canadian position on freedom of speech and freedom of the press that remains at the heart of smart Canadian journalism today. “In a style that is highly articulate, humorous and emphatic, John Ralston Saul provides a succinct, relevant look at Canadian history, our current whereabouts, and an ambitious rally for participatory democracy and intelligent media for the future.” Publisher.

For a full listing of our library holdings on Joseph Howe, please click here. Please note that many of these items are rare or delicate and might require visiting our libraries in person to view the material.

In honour of Joseph Howe, here are a few other books about media freedom:

The new censorship : inside the global battle for media freedom by Joel Simon describes the threats to media freedom happening today across the world. “Journalists are increasingly vulnerable to attack by authoritarian governments, militants, criminals, and terrorists, who all seek to use technology, political pressure, and violence to set the global information agenda. Reporting from Pakistan, Russia, Turkey, Egypt, and Mexico, among other hotspots, Simon finds journalists under threat from all sides. The result is a growing crisis in information―a shortage of the news we need to make sense of our globalized world and fight human rights abuses, manage conflict, and promote accountability.” Publisher.

Compared to many of the abuses facing journalists around the world, journalists working in Canada have much more freedom, but that doesn’t mean that we can take the freedom of the press for granted. Mark Bourrie‘s Kill the messengers : Stephen Harper’s assault on your right to know is a critical look at the restrictions placed on access to information by the Harper government.”The public’s right to know has been undermined by a government that effectively killed Statistics Canada, fired hundreds of scientists and statisticians, gutted Library and Archives Canada and turned freedom of information rules into a joke. Drawing evidence from multiple cases and examples, Bourrie demonstrates how budget cuts have been used to suppress the collection of facts that embarrass the government’s position or undermine its ideologically based decision-making. Perhaps most importantly, Bourrie gives advice on how to take back your right to be informed and to be heard.” Publisher.

Also written by Mark Bourrie, The fog of war : Censorship of Canada’s media in World War Two looks at some of the fascinating stories that were censored in Canada due to concerns for our national security and civilian morale. “In Mark Bourrie‘s illuminating and well-researched account, we learn about the capture of a Nazi spy-turned-double agent, the Japanese-Canadian editor who would one day help develop Canada’s medicare system, the curious chiropractor from Saskatchewan who spilled atomic bomb secrets to a roomful of people and the use of censorship to stop balloon bomb attacks from Japan. The Fog of War investigates the realities of media censorship through the experiences of those deputized to act on behalf of the public and reveals why press censorship in wartime Canada was, at best, a hit-and-miss game.” Publisher.

Many of us acknowledge the necessity for some censorship during wartime in order to maintain public safety, but the terrorist attacks of 9/11 have greatly muddied the waters. Free speech in fearful times : after 9/11 in Canada, the U.S., Australia & Europe is an anthology edited by James L. Turk and Allan Manson that delves into the implications of current anti-terror laws on our freedom of expression. “Free Speech in Fearful Times offers a unique perspective on how the laws created to “protect” us can actually harm us. Following the events of 9/11, rashly conceived anti-terror laws were introduced that put civil liberties at risk, and eliminated long-standing legal protections in Canada, the United States, Australia, Europe, and the United Kingdom. Internationally recognized experts analyze the impacts of anti-terror laws and offer solutions to protect freedom of expression, academic freedom, and civil liberties.”