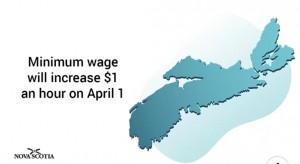 Nova Scotia is making the largest increase to the minimum wage rate in a decade. As of April 1, minimum wage will rise $1 an hour, to $12.55.

Premier Stephen McNeil says all Nova Scotians should benefit from the province’s economic growth and steadily improving business environment. He says government is moving forward in a balanced way by making changes that benefit both workers and businesses.

Businesses will benefit by the cutting of the partial hour rule. The rule means employers have to round up time worked for minimum-wage employees. For example, if an employee works for 15 to 30 minutes, the employee must be paid for a half hour. Businesses have been asking for the rule to be removed to help cut costs and administrative burden.

A copy of the Nova Scotia Minimum Wage Review Committee Report is available at https://novascotia.ca/lae/pubs/documents/Minimum-Wage-Review-Committee-Report-Dec-2019.pdf

Nova Scotia is making the largest increase to the minimum wage rate in a decade.
https://haligonia.ca/nova-scotia-is-making-the-largest-increase-to-the-minimum-wage-rate-in-a-decade-273933/