The Nova Scotia RCMP will be under new leadership in 2019 with the recent appointment of Chief Superintendent Lee Bergerman to the position of Commanding Officer, “H” Division, at the rank of Assistant Commissioner. 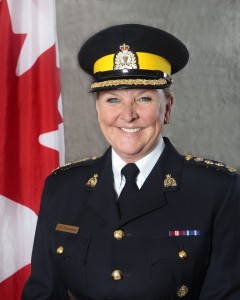 A 32-year member of the RCMP, C/Supt. Bergerman brings a diverse operational background to the role based on her experience across Canada in a variety of integrated policing environments. C/Supt. Bergerman spent the last 2.5 years in Nova Scotia as the Officer in Charge of Halifax District RCMP.

“I am honoured and excited about taking on this new and exciting role with the RCMP in Nova Scotia,” says C/Supt. Bergerman. “I have had the opportunity to work with dedicated employees within Halifax District and now I will be able to get to know and work with the entire Division, along with many provincial and policing partners.”

Born in Vancouver, British Columbia, Lee joined the RCMP in 1986. She was first posted to Thompson, Manitoba, where she began working in General Duty and soon began her extensive career in undercover police work. In 1995 she was transferred to British Columbia and eventually moved into the Criminal Intelligence and Serious Crime units. In 2000, she moved to Unsolved Homicide Unit, where she worked for seven years as an investigator. She was then transferred to Ontario in 2007, where she worked in various roles in the Joint Force Operations organized crime section, including overseeing investigations as Commander of the Combined Forces Special Enforcement Unit.  In 2013, she was transferred back to British Columbia as the Officer in Charge of Major Projects for the Federal Serious and Organized Crime unit, where she and her team worked to disrupt and dismantle organized crime at the national and international level. In 2016, she accepted the position of Officer in Charge of Halifax District in Nova Scotia.

Nova Scotia RCMP’s current Commanding Officer A/Commr. Brian Brennan has accepted the position of Deputy Commissioner of Contract and Indigenous Policing and will be transferring to Ottawa in the new year.  A specific transition date will be confirmed in early 2019.

“Working with C/Supt. Bergerman over the past few years, I saw firsthand her leadership and experience benefit the RCMP and the citizens we serve,” says A/Commr. Brennan. “I want to thank Nova Scotia RCMP employees, our policing partners across the province and the citizens of Nova Scotia for your support during my time as Commanding Officer.  I know the Division is being left in extremely capable hands.”