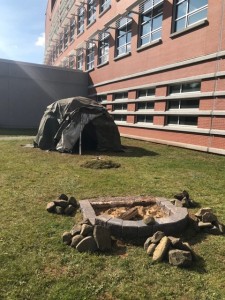 A first in Canada for the RCMP, the Nova Scotia RCMP has constructed a permanent sweat lodge at Headquarters in Dartmouth.

Sweat lodges are part of Indigenous tradition and are commonly used within the Indigenous community. Made of natural materials, it is a space where sacred purification ceremonies or “sweats” are held for the purpose of spiritual cleansing.‎ RCMP employees will be able to attend sweat ceremonies for self-reflection and prayer in the lodge.

“The RCMP in Nova Scotia continues to enhance our relationship with Indigenous communities,” said A/Commr. Brian Brennan. “We want to better understand and support the teachings of the Indigenous people and believe that a permanent sweat lodge will afford us that opportunity for all employees.”

As part of the ceremony, White Eagle Sundance Chief William Nevin presented on the significance of a sweat lodge. He was accompanied by Cpl. Dee-Anne Sack, Community and Aboriginal Diversity Policing Services, and Sundancer and retired member, Jeff Ward, who explained the meaning of the four rounds of a sacred sweat lodge ceremony. The ceremony closed with the Mi’kmaq Honour Song followed by the blessing of the lodge.

In 2017 the Nova Scotia RCMP introduced the Eagle Feather as a new option for victims, witnesses and police officers to swear legal oaths, similar to a Bible or affirmation. It is also offered as a comfort for a client when interacting with employees at a detachment. The Eagle Feather was another first for the RCMP in Canada.