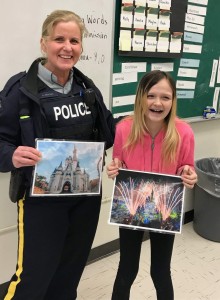 A group of lucky students from throughout Nova Scotia are about to embark on a magical journey to Walt Disney’s Magic Kingdom, and members of Nova Scotia RCMP are there to help make it happen.

The ‘Dreams Take Flight’ program provides children, who may not have had the opportunity to otherwise, to visit Walt Disney World with a one-day, all-expense-paid trip to the most magical place on Earth. The process leading up to this adventure begins several months before when the four RCMP officers, who work in Halifax District, Guysborough District, Colchester District, and Yarmouth, respectively,In worked with schools and the ‘Dreams Take Flight’ selection committee to nominate very deserving children between the ages of seven and twelve. With assistance from school staff, parents and family physicians, the nominations were sent forward, all while being kept secret from the children.

The children leave Halifax early in the morning and are flown to Orlando on a flight donated by Air Canada, which is crewed entirely by volunteer Air Canada flight attendants, pilots, air technicians, group leaders, corporate sponsors and community volunteer chaperones. They will spend an entire day at the Magic Kingdom and are flown back to Halifax the same night. All of the costs are provided for the children including food, admission tickets, aircraft fuel and landing fees, catering costs, Customs and Immigration fees, t-shirts, hats, sun screen, bus transportation and ground-handling. This is all made possible through several corporate sponsors.

Nova Scotia RCMP would like to wish these children a fantastic day at ‘The Most Magical Place on Earth’ on April 25.