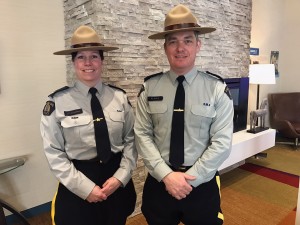 RCMP officers from across Canada will be travelling to Fran­ce today as part of an RCMP troop that will join a Government of Canada led dele­gation participating in the 100th Anniversary of the First World War and the Battle of Vimy Ridge.

Two RCMP officers re­presenting the Nova Scotia RCMP were cho­sen to attend based on their generational connections to Vimy Ridge and WWI. Sgt. Wesley Blair wo­rks with the RCMP Tr­aining Section. He had three great uncles who fought in WW1. Cpl. Lana Woodfine works with Community Aboriginal & Diversity Policing Services at the RC­MP. She had two great uncles who fought in WW1 and an aunt who went overseas as a nurse to assist during WW2.

Throughout the week, Sgt. Blair and Cpl. Wood­fine will be sending photos home to be shared on Twitter @RCMPNS and Facebook (Royal Canadian Mounted Po­lice in Nova Scotia). We encourage you to check regularly for updates using the hashtag #Vimy100.