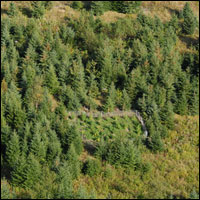 Look way up and you may see the RCMP flying overhead as they gear up for their annual marihuana eradication program.

A team of police officers from the Nova Scotia RCMP and Municipal Police Agencies under coordination of the RCMP Marihuana Grow Op Enforcement Team, are conducting aerial marihuana eradication operations over the summer months. As in past years, the RCMP continues to encourage the public to contact their local RCMP detachment or police force of jurisdiction if they have information about a marihuana grow operation.

Outdoor marihuana grow operations are often associated with organized crime which leads to an increased risk of violence. Grow ops can be guarded and unsuspecting citizens may happen upon them unknowingly. Grow ops are often protected by booby traps such as bear traps and firearms.

“At this time of year we take advantage of the outdoors. Whether it’s hiking, camping, flying, hunting or fishing, it’s important the public is able to recognize the signs of marihuana grow operations,” says MacKinnon. Marihuana plants are bright green and the leaves have seven jagged fingers. The plants grow between three and six feet tall and give off an odour similar to that of a skunk. Grow operators will use a number of props to deflect suspicion including hiding marihuana plants between natural growing vegetation.

Common signs of a marihuana grow operation include:

– Abandoned vehicles parked on side roads or trails;

– People observed walking in remote areas for no apparent reason;

– People trespassing onto fields on foot or by off-road vehicle;

– Bags of fertilizer, planting trays, or chemicals located in remote areas or dumped at the side of the road;

– Cleared out areas in swamps, wooded areas or cornfields;

– “No Trespassing” or “Beware of Dog” signs within forests, cornfields etc.

Police advise the public not to approach outdoor grow operations as they may be guarded or booby trapped. The public is reminded not to touch marihuana plants because harmful chemicals may have been used on them.

If you believe you have located a marihuana grow operation, leave the area immediately and contact any RCMP Detachment, local police or Nova Scotia Crime Stoppers at 1-800-222-TIPS (8477) or by a Secure Web Tips at www.crimestoppers.ns.ca. Calls to Crime Stoppers are not taped or traced and if police make an arrest and lay charges based on a tip, callers qualify for a cash award from $50 – $2000.