Nova Scotia RCMP would like to introduce you to C/Supt. Leather 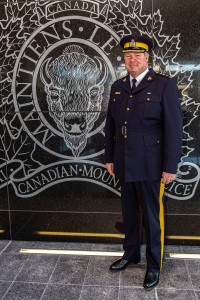 “I will aspire to lead by instilling a hope for success in our members and a belief in themselves,” says C/Supt. Leather. “I am committed to supporting the members of the RCMP in Nova Scotia and the public I serve.”

C/Supt. Leather brings a diverse background of policing experience to his new role, which he assumed on September 12. He began his policing career in 1990 as a member of York Regional Police, serving as a general duty member, and several plain clothes units including District Plain Clothes, Mobile Support Services (full time physical surveillance); Intelligence Bureau- Biker Enforcement, the Provincial Biker Enforcement Unit, and the York Regional Police Hold Up Squad. He also served on a Biker Task Force. He was seconded to an intelligence unit of the RCMP in 2001, and joined the RCMP in 2004.

C/ Supt. Leather continued to work in Ontario in intelligence, and also worked in the RCMP’s Professional Standards Unit. He was promoted to Inspector in 2014 and was assigned the role of Operations Officer in BC on the Integrated National Security Enforcement Team. He was promoted to Superintendent in 2017 and assumed the role of Commander of Serious and Organized Crime in and the Combined Special Forces Enforcement Unit in the Greater Toronto Area (GTA).​

On a personal note, C/Supt. Leather is active with youth in his community as well as with the Special Olympics.​ He has also been a long time basketball official in the GTA.

“I am very excited to have Chris join our Senior Management Team. Having worked with Chris previously, I know first hand that he is an exceptional leader who is passionate about his responsibility as a police officer,” says Assistant Commissioner Lee Bergerman, Commanding Officer of Nova Scotia RCMP. “I know he will bring that same passion and leadership to his new role,” she continues.​

Nova Scotia RCMP would like to introduce you to C/Supt. Leather
https://haligonia.ca/nova-scotia-rcmp-would-like-to-introduce-you-to-csupt-leather-271555/