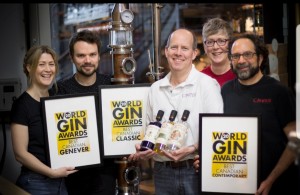 Compass Distillers is no stranger to winning with thirty-seven awards already to their name in just under three years of operation. Late last week the grain-to-glass distillery took home their biggest win to date – 3 Best in Canada wins from the World Gin Awards. Compass received awards for their Gin Royal (Contemporary), Gin Wild (Classic), and Fort George Genever (Genever). This win was the best showing for a Canadian distillery at this year’s awards.

Taking home Best Contemporary Gin in Canada, Gin Royal is the company’s crown jewel. This royal blue-coloured gin is made in collaboration with the Nova Scotia Beekeepers Association and contains local honey and royal jelly. $1.00 from every bottle sold is donated to the Nova Scotia Beekeepers Association to assist​ in their efforts to promote bee health and sustainable beekeeping in Nova Scotia.

Winning the Best Classic Gin in Canada is Gin Wild, a classic gin with a Nova Scotian twist.​ Made with Nova Scotian wheat and distilled with a blend of classic gin botanicals, the star of this gin is the hand-picked wild Nova Scotian juniper.

Fort George Genever walked away with a win for the Best Genever in Canada. Made from a mash of Nova Scotian rye, corn and malted barley, Fort George Genever is twice distilled and infused with a subtle blend of botanicals including juniper, caraway, cinnamon, frankincense and pink peppercorn, then aged in oak barrels on-site at the Halifax Citadel.

The World Gin Awards take place in Norfolk, England, where 20 international judges choose gins from around the world.

“Compass Distillers is thrilled with these results, as they confirm our ability​ to make world-class gin with Nova Scotian terroir,” says Compass Distiller President, Graham Collins. “Winning three categories with the best contemporary gin, best classic gin, and best genever showcases how well Compass can compete with the rest of the world. These results are unprecedented for a Canadian craft distillery.”

Compass Distillers began production in July of 2017 and distills rum, vodka, gin, aquavit, other spirits, and bitters. Since the company’s founding, Compass Distillers has remained true to its promise of making spirits 100% from scratch and using local ingredients. It it’s in their bottle, Compass made it.