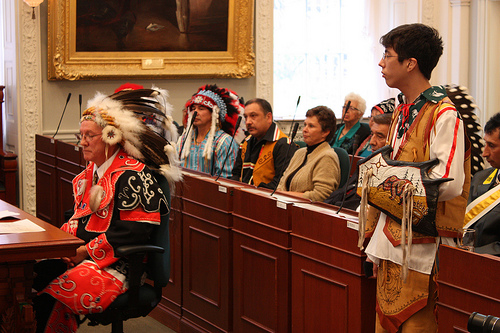 Monday's Treaty Day celebrations marked a historic turning point for First Nations peoples in Nova Scotia. CTV Atlantic is reporting that the province's Mi'kmaq bands are close to an agreement establishing their own autonomous system of government. Chiefs Debbie Robinson and Terry Paul have been in negotiations with the provincial and federal government for the creation of a separate democratic body that would allow them to draft and oversee legislation for their reserves.

The search for an appropriate location for a new Mi'kmaq House of Assembly is underway, though many of the finer details still need to be worked out. One possible idea being batted around is the current Spring Garden Road Public Library which is slated to close in 2014 when the construction of the new Halifax Central Library is completed.

What are your thoughts on this historic move for our First Nations people?