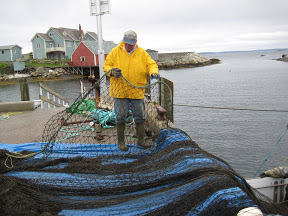 I grew up in a small fishing village along the eastern shore of Nova Scotia. There where four fishermen in the bay, Guy Boutilier, Jackie Borgel, Guy Power and Peter Connors. Just as the buds on the trees are a sign of spring, so was the launching of the fishing boats in the bay. Men from our community as well from the neighbouring bay were called to help launch the boats from their winter berths to slide down the wooden ramps into the water. Another season had begun.

As kids, we’d set the alarm for 4:30 a.m., head down to the government wharf to meet the fishing crew. My first time was when I was 12. It would also be my last time. I was never so sick in my life. An appreciation for the life of a fisherman was gained that morning as I thought to myself “this must be what it’s like to be near death”. Guy Power was a kind man who thought if he stopped the boat and let me jig mackerel awhile, that I might feel better. Nope. 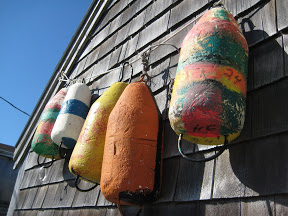 Driving along the gravel road to Taylor Head Beach lobster buoys dotted the rocky coastline. Locals could tell which buoys belonged to whom by their colour and number.

Two fisherman have since passed away (the two Guys) and younger men have taken on the livelihood. Now there are only two boats and they exclusively lobster fish.