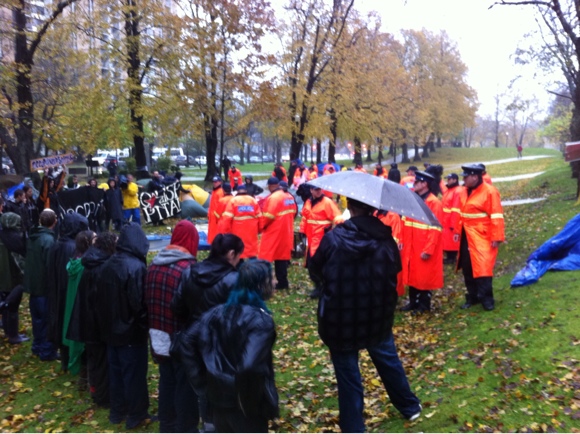 Occupy Nova Scotia has been evicted from Victoria Park, and arrests were made.  See below for the official press release, eviction notice, and video from social media circles.

Statement from Halifax Regional Police re: Occupy Nova Scotia
HRM officials provided notice to the Occupy Nova Scotia protesters this morning that they were in violation of the Parks bylaw (P-600). We had sincerely hoped they would comply with the bylaw.
After service of the notice, police met with the protesters and asked them to start making preparations to leave. After several hours, police saw no effort on the protesters' part to start taking down tents. After police spoke to the protesters, a number of them took down their tents and left. A small group of people, however, attempted to prevent police from taking the tents down. As a result, 14 people (12 men and 2 women) were arrested for obstructing police officers in the execution of their duties. The accused are being processed and will be released on Promises to Appear in court at later dates.
What started as a peaceful protest had devolved into a campground that was increasingly making public safety an issue. Halifax Regional Police had received over 50 public complaints regarding the protesters, including noise complaints, drug use, minor assaults, medical emergencies, aggressive and threatening behaviour, and defecating in the bushes. In the last week, we had other citizens refused access to Victoria Park, including a woman in a wheelchair who wasn’t allowed to pass through, another woman who was spat on, and a family who couldn't bicycle in the park after protesters threatened and swore at them.
The police respect everyone’s democratic right to protest peacefully and assemble freely. However, camping in our public parks is prohibited, and depriving other citizens of their right to access and enjoy our parks is against the law.
(Friday, Nov. 11, 2011) – Occupy Nova Scotia was put on notice today that they are in violation of HRM by-law P-600 prohibiting camping in municipal parks.
Notices were distributed to participants in Victoria Park today. The occupiers have been informed that under the provisions of the Municipal Parks By-Law camping without written permission is prohibited. Similarly, no one is to be in a municipal park between 10 p.m. and 5 a.m. without the written permission of HRM.
“Council and the public have respected the right to peaceful protest and free assembly, but the time has come for the encampment to end,” said Mayor Peter Kelly. “Our parks are for all of the public, not an unregulated campground for some.”
Under the notice, the occupiers are required to take down their tents and other structures and collect their belongings so the park may return to regular public use. The content of the notice is included below. If the encampment does not disband, the by-law will be enforced.
The provisions of the Parks by-law will also be enforced in the Grand Parade.
“Since the departure of the protesters from the Grand Parade, we have made a significant effort to bring it back to the condition the public expect,” said the Mayor. “Camping will not be permitted in the Grand Parade or any HRM park.”

While the Halifax Regional Municipality has respected the Occupy Nova Scotia participants’ right to a peaceful assembly and their right to have their issues known publicly, it is now time to return Victoria Park, the Grand Parade and other HRM parks to the public at large and for protest participants to comply with the Municipal Parks By-Law.

HRM will be enforcing this By-law effective November 11, 2011, by this notice you are required to remove any tents, belongings and any other items or structures from Victoria Park. Failure to do so will result in further enforcement of By-Law P-600.

By-Law P-600 also applies to the Grand Parade and will be enforced. While overnight occupation and the erection of tents or other structures for accommodation is prohibited under the By-law, all HRM parks remain a place for assembly and peaceful protest.