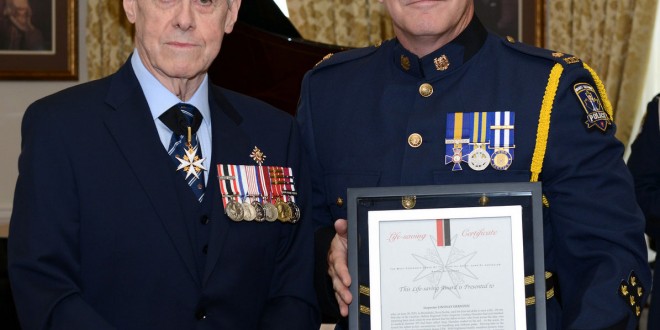 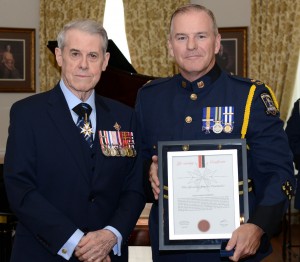 On May 28, Inspector Lindsay Hernden of Halifax Regional Police was presented with a St. John Ambulance Silver Life-Saving Award by the Lieutenant Governor of Nova Scotia.

This award recognizes individuals, or groups of individuals, who have saved or attempted to save a life through the application of first aid knowledge and skills.

In June of last year, Insp. Hernden rushed to the aide of his father-in-law, Bob, who had suffered a heart attack. While waiting for emergency personnel to arrive, Insp. Hernden instinctively began to perform CPR. When emergency personnel arrived and saw how competent he was, they asked him to continue with compressions, allowing them to focus on other life-saving techniques. Bob’s colour soon began to improve and an additional first responder arrived and took over for Insp. Hernden. He continued to assist with coordinating the scene by giving meaningful instructions to bystanders and family to clear furniture to make room for the additional first responders who would be arriving. He also consoled his family members and kept them calm by explaining exactly what the first responders were doing in their effort to save Bob.

Insp. Hernden’s CPR skills, physical condition and calm, commanding nature were all key elements in the successful outcome of this incident. Professionals in the first responder community know how stressful it is to respond to such incidents, let alone one involving your immediate family. Insp. Hernden’s performance on that day is testament to his professional and personal drive, training, leadership skills and, most importantly, his compassion. Well done, Insp. Hernden!

NSHA Public Health is advising of a potential public exposure to COVID-19 on Halifax Transit...