It was nice to see SO many people out in Halifax last night to see the Olympic torch run by.

However, it could’ve used some better planning. 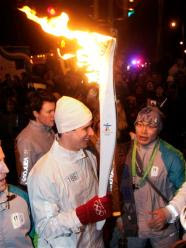 We showed up to Brunswick Street where Sidney Crosby was picking up the torch at Sackville Street. He would then run 300 metres to Carmichael street and pass it off to snowboarder Sarah Conrad.

There were thousands of people. People we’re sitting on the wall surrounding the base of citadel hill, on walls and stairs on buildings lining the street. All up Citadel Hill. Thousands. They were everywhere you could think of. It was insanity.

No barricades along the route.

Someone tell me how that makes sense.

Anyway so Crosby jogs by and he’s surrounded by this circle of security detail about 25 strong.

All you could see was an arm with a torch, and a little white toque. Then when he passed off the torch everyone tried to get closer to follow it down the hill. As soon as he passed a spot, people started walking in behind on the street.

The city’s holiday parade is Saturday, I know there must be barricades that have been pulled out of storage. Did nobody think, “hey! let’s use them for the part of the torch relay that days in advance we were predicting huge crowds to show up for.”