[It’s my birthday on Thursday so I’m switching things up on the blog this week and presenting a special guest post today instead. My online handle has long been AliasGrace, so a post about Margaret Atwood during the week of my birthday seems only fitting. If you’re interested in sharing your East Coast story, please drop me a line at kimberly.aliasgrace [at] gmail [dot] com or DM me on Twitter.] 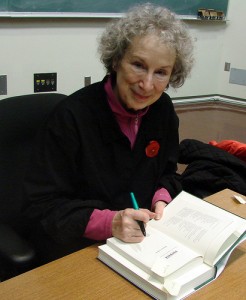 In the fall of 1974, my parents moved from Ottawa to Dartmouth, and I spent three months with my dad while waiting for their furniture and my mother to arrive. It was quite a bit like camping, and we both laughed at the stripes that would imprint themselves on our lower halves after we watched Hawaii Five O on television. My father also found it hilarious that he was awakened by my curses around 3AM every night as I turned over on the ‘safari cot’ on which I was sleeping — and was promptly flung onto the floor. Eventually my mother (keeper of the marital budget) authorized the purchase of a ‘hide a bed,’ mercifully removing one source of parental amusement.

Halifax didn’t used to be perceived as a literary town, but my experience there always led me to question that view. The highlight of my three months in the area (aside from feeding the swans — and eventually being bitten by one — at Sullivan’s Pond) was the news that Margaret Atwood was going to be doing a reading at Dalhousie University.

In 1974, Atwood had published two novels, the incredibly comic The Edible Woman (1969) and the far-less-well-received Surfacing (1972). It was two years before the publication of her comedic tour de force novel of place (because it is very much a ‘Toronto’ book, in the same way Life Before Man is), Lady Oracle (1976). Survival: A Thematic Guide to Canadian Literature, Atwood’s seminal work of Canadian literary criticism, had also appeared (1972), and she had nine volumes of poetry to her credit (one of which, The Circle Game, had won the Governor General’s Award in 1964). Her appearance in Halifax coincided with the release of her 1974 volume of poems, You Are Happy.

The news that Atwood was doing a reading galvanized me. I had never actually been to an author reading, but I was not about to miss this one. The chance to hear one of my literary heroines actually speak the line, ‘Please die/so I can write about you,’ was not to be missed. To my horror, however, a week or so before her scheduled appearance, Atwood announced that she was going to cancel her reading unless each and every copy of the poster designed to publicize it was removed. The offending poster was a line-drawing caricature of the young Atwood. It featured a lot of unruly hair and a pair of largish, cartoon breasts. It wasn’t the depiction of her hair that bothered her. Claiming that it was sexist rather than that it was unflattering, Atwood’s threatened cancellation of her reading was a story with legs, and every CBC local news report for the better part of the week preceding the reading provided an update on the standoff.

Dalhousie obviously didn’t want to lose her, and the poster removal was hastily undertaken. I’m not sure what attendance at the reading would have been like without the poster. I’ve certainly heard Jack Hodgins talk about giving readings across Canada in the early 1970s at which only two people showed up – to see someone else read. Being Canadian, they politely swallowed their disappointment and stayed to hear him rather than walk out. By the time I arrived, it was complete and utter chaos. The only seats to be found were in the aisles, on the stairs, in front of the stage. A bevy of worried fire marshals made several announcements about the fact that the room had a certain capacity and it had been exceeded. The audience studiously ignored these announcements, shifting only slightly on the stairs to create marginal exit routes that could, perhaps, have been used for egress if you were a Lilliputian.

And then Atwood began to read, in her wonderfully deadpan voice. Despite the overcrowding in the auditorium, the only sound to be heard other than her voice was the irregular ‘ping’ of a staple gun, as someone from the theatre department methodically attached orange, yellow and green flowers to a transparent backdrop curtain behind her. Because, of course, the show must go on. And it was the 1970s.

A third-generation avid reader, Ruth Seeley still thinks the best gift you can give a five-year old is his/her own library card. Her reading has gone through many phases, including the My Friend Flicka/Jim Kjelgaard animal phase, the Tudor historical fiction phase, the entire drama section at the Ottawa South Public Library phase, and a (mercifully brief) drugstore mass market paperback phase. She blogs at www.ruthseeley.com and dispenses pearls of feisty public relations and social media wisdom at www.nospinpr.com. She has attended many readings since the one she describes in this post, but rarely has she had to fight so hard for a seat. Her East Coast roots go back many generations (and a few centuries) to the United Empire Loyalists who settled in the Fredericton Junction/Rusagonis/Miramachi area of New Brunswick. One of these days she plans to read The Seelys of New Brunswick, although the temptation to correct the spelling may be irresistible.