The only thing comparable to good food is good company, and on the best and loveliest of days, you are lucky enough to get both. I tend to always include a few details about my dinner mates on here, because who we eat with can be as important as the meal itself.

An amazing meal can still be

amazing in poor company, but how much more memorable is it when the conversation and laughter is as delectable as the food and wine are on the palate? It’s this wonderful marriage between food and friendship that makes me particularly fond of food cultures that can be considered communal in any way. Taking several hours to eat, over several courses, with many friends in France, for example. Or ordering dozens of dishes in Korea, all meant to be shared with your dinner mates, while none of which exclusively for you. It’s the sharing of stories and lives, those connections across the table, that make what we’re eating even more special. Your food becomes an event. A celebration.

Along these lines, last week, I had the vast pleasure of meeting Jenny Osburn: the exceptional woman behind Union Street Café and the Wick Pub in Berwick, Nova Scotia, and otherwise known as the Union Street Kitchen Witch. Jenny’s food blog was the very first one I came across when I arrived back in Canada last March. I was in the Annapolis Valley at the time and looking for a place to take my dad for his birthday. That’s when I found Union Street’s website, and subsequently, Jenny’s blog. After that discovery, I went and started this little blog, and Jenny and I began sharing some food commentary back and forth. This is what eventually led up to the lovely, sunny lunch (and dessert – of course) that we shared in person last week.

Rather than it being a first meeting, talking with Jenny was more like catching up with a long lost friend, so to say it was worth the road trip would be saying the very, very least. Within the first 20 minutes of our face-to-face lunch, we were telling heartfelt, personal stories over white wine and Indian-inspired pizza. The food was fantastic (especially that no-bake cheesecake!) but it’s the conversation we had that day that will stick with me, and it’s what made that glass of wine extra tasty.

If you are in the Valley and in the vicinity of Berwick (and if you’re not – make the trip!), you absolutely must swing by and check out Union Street Café. Jenny and her family have been supporting and making truly local food for years, long before it ever became popular; which, as we talked about that day, is hardly a bad thing. Buying, eating, and supporting local produce/producers is a fine example of a trend gone right, and one that’s hopefully here to stay.

Yesterday,  Jenny and her significant mister happened to be in Halifax, so F. and I met up with them for lunch. Over our too many plates of sushi, I learned that Jenny won the 3rd annual Local Food Hero of the Year award last winter, through Select Nova Scotia, for championing the local food movement over the past 10 years. The third annual! The award was only previously given out to Chives and Fid: landmarks in Halifax for excellence in food. What a wonderful way to recognize her commitment to her community and the food it produces.

Jenny has posted some gorgeous strawberry recipes on her blog over the past few weeks, well-stocked by her local u-picking haunt. Next time I’m in the Valley I might try to snag a few pints before they go out of season (which is soon!), along with more of Jenny’s wonderful company.
To commemorate the final days of strawberry season, here is one of my mom’s favourite, easy-as-pie ways to stock up on the berries and savour them long after they’re gone.
Debbie’s Strawberry Freezer Jam
4 cups chopped strawberries
1-1/2 cups of sugar
1 package of Bernardin Freezer Jam Gelling Powder
Place berries in a large bowl.  Stir in sugar and let stand 15 minutes.  Slowly sprinkle Gelling Powder into the fruit mixture, and keep stirring for 3 minutes.  Let stand 5 minutes (don’t worry if you go a little longer).  Stir again for 1 minute.  Pour into sterilized jars.
To sterilize, you can: 1) put the jars on a cookie sheet and put them in the oven; 2) run them  through a hot wash in the dishwasher; or 3) put the jars and lids in a pot of boiling water for 15 minutes before filling.  Any method works fine as long as the lids are boiled for sealing.
Add the jam to your jars, leaving about 1/2 inch head space. Put the lids and rims on, making sure to tighten them well.  Once you hear them popping you’ll know you have the seal you need.  Put them in the freezer.
—
Apparently, most freezer jam recipes call for equal part berries and sugar, so, for example, 4 cups of strawberries and 4 cups of sugar. My mother thinks that it’s overkill, and I tend to believe her. With her method, I’m ashamed to say that I could eat an entire jar of the freezer jam straight: it’s that good and keeps a remarkably fresh taste. I even gave a spoonful to Colleen the other day, when she was sick, joking about its homemade, medicinal properties.
Much to my great horror, I discovered that my mom uses Splenda instead of real sugar (see my post about real vs. fake food!). Given my love for her jam, however, and that white sugar isn’t terribly healthy to begin with – ahem – I suppose I can’t be too hard on her?
Here’s to strawberries, and to those new friends who pop into our lives, seemingly out of nowhere, but who feel like they’ve been there all along.

(… and to the two glasses of wine I had while writing this post last night, which may or may not have added to its sentimentality!) 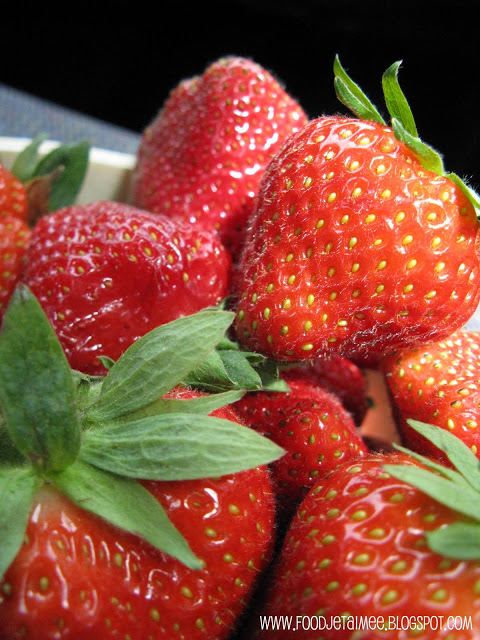 On the Company of Friends ( Strawberries)
https://haligonia.ca/on-the-company-of-friends-strawberries-41564/