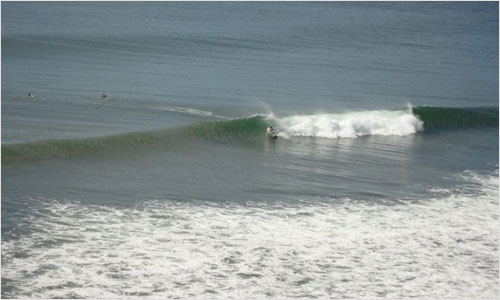 Surfers enjoy the waves brought on by Hurricane Danielle at Lawrencetown Beach. Photo by Chris Helland.

After Hurricane Juan hit Nova Scotia just after midnight on September 29, 2003, some Nova Scotians are worried about the impact of Hurricane Earl on the province.

Surfers love the swells brought on by these big storms, and since Saturday surfers from near and far have been taking advantage of the waves carried in by Hurricane Danielle.

Danielle did not make landfall; Earl may.

It is still too early to be concerned, but Environment Canada advices the public “to stay tuned for updated forecasts.”

The Weather Network explains that “on its current track, Earl is forecast to charge up the US eastern seaboard and eventually move into Canadian waters. Just how much of an impact the storm will have on the Maritimes and Newfoundland is still to be determined.”

Hurricane Earl is now a Category 4 hurricane, but as it moves up the coast it is expected to weaken.

The storm, in some form or another, is expected to reach Nova Scotia by the weekend.

On the lookout for Hurricane Earl
https://haligonia.ca/on-the-lookout-for-hurricane-earl-24614/