Once Upon a Time isn’t a show I’m fond of reviewing every week, but I’m still watching it and thought I’d check in following Sunday night’s episode.

I’ve had some problems with the show so far, and it’s by no means my favorite of the shows I started watching this fall. That said, there are still aspects of it I really enjoy, and Sunday night’s fourth episode, “The Price of Gold” was an exciting episode that took the mystery of the series to a new level.

My largest problem with Once remains to be Henry The Precocious Moppet. His acting is too wooden, he’s used for exposition too frequently, and it still remains unclear why everyone is coddling this kid. I prefer scenes he’s not in, and he tends to up the campiness factor of every scene he’s in by at least 50%. I don’t think he and Jennifer Morrison’s character, Emma, have yet achieved a believable warmth or chemistry together.

The other problem with Once is that it lacks subtlety. It punches you in the face with its themes, whimsy and inter-world connections. Did you get that this week’s episode was about Changing Your Life? They made the theme so obvious, they might as well have featured a guest appearance from Oprah. Just look at Ruby, who will eventually be revealed as Little Red Riding Hood. Does she have to be SO over the top? The show would benefit from toning these connections down a touch – just look at Ginnifer Goodwin’s character of Mary. Her Snow White-ness isn’t shoved down our throats, and she’s a more interesting character because of that. I’m not sure how Once can solve this problem, but I hope they find a way to bring a little more subtlety into the series.

I don’t want to be too negative though, because I did enjoy parts of the episode. In particular, the aspects that involve Emma interacting with other people in the town, shaking things up, and laying down roots because she wants to, not because the son she put up for adoption thinks she can break a fairytale curse.

One of the most interesting developments this week is the connection between the town sheriff and the mayor – they’re sleeping together, yet he offered Emma a permanent job as deputy. Was it the mayor’s idea? Why would she want Emma to stick around? And if not, why would he offer his lover’s nemesis a reason to stay in town? The fairytale world storyline this week was good, and further developed that realm. We saw Cinderella make a deal with Rumpelstiltskin to change her life – he killed her Fairy Godmother and thus was the one who sent her to the ball instead, after making a deal with her. She signed on the dotted line without knowing what she’d be giving up, and it wasn’t until she’d married the prince that he told her the price was her firstborn child.

Cinderlla’s husband came up with a plan to trick Rumpelstiltskin into taking a new deal and signing a contract with a magic quill that imprisoned him. But all magic comes at a price, and soon after Rumpelstiltskin was behind bars the prince disappeared. 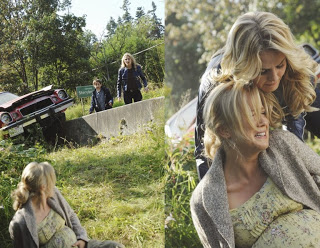 In the real world, a heavily pregnant Cinderella was Ashley, a maid who’s made a deal with Mr. Gold to give up her baby. Um, haven’t these people been in Storybrooke for as long as Emma’s been alive? Why is Ashley only pregnant now? How does that work? Details aside, it was interesting to see Emma work with Mr. Gold to get Ashley back, only to make a deal with him so that Ashley could keep her child.

The scene at the end of the episode, where Henry ran to his house to get there by 5:00 p.m. when his mom would be home and left a shoe on the staircase, was better symbolism that most of what we’ve seen on the show. Henry was like Cinderella, but not in such a heavy-handed way that it makes you want to punch someone.

Once Upon A Time will be on break for a week thanks to American Thanksgiving, and it sounds like it’ll be a rather Henry-centric episode. So we have that to look forward to.

What do you guys think of Once Upon A Time? Are any of you guys watching Grimm? I meant to check it out and didn’t have time – how do the two compare?

Once Upon A Time: Cinderella's Story
https://haligonia.ca/once-upon-a-time-cinderella-s-story-48648/