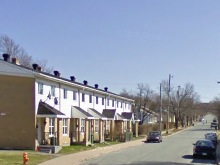 Two serious incidents on the Halifax Peninsula in the last 24 hours are being investiaged by Halifax Police.

View Larger Map
At 1245 am police received a 911 call and responded to the 3000 Block of Barrington Street. The Victim a 23 year old male had left before police arrival, and was taken to the QEII, by  a friend. Police attended the hospital and learned that he suffered stab wounds to his neck and head. The victim in this matter is uncooperative with police at this time. The victim was treated and released from the hospital.

Detectives in the HRP/RCMP Integrated General Investigative Section are investigating.

Police are currently on scene of a shooting that occurred at the 3000 block of Mic Mac Street.

At approximately 415 am police received a 911 call and responded to the 3000 block of Mic Mac Street in Halifax. They found a 48 year old male victim who was shot, he was attended to by EHS and taken to the QEII for treatment.

One man stabbed, another shot in separate incidents
https://haligonia.ca/one-man-stabbed-another-shot-in-separate-incidents-10437/