The reality of the Hollywood film industry is that a massive percentage (I’m going to estimate roughly 35%) of talent behind and in front of the camera hail from the Great White North. We have a dearth of creative talent, several highly respected film schools, a set of slick tax credits and the National Film Board but surprisingly few films that have made any lasting impact, especially when you compare the Canadian experience to that of other small market producers like Australia (Mad Max, Gallipoli, Chopper, Rabbit Proof Fence), New Zealand (Braindead, The Piano, Out of the Blue, Heavenly Creatures), the Republic of Ireland (In The Name of the Father, Bloody Sunday, The Commitments, Wind That Shakes The Barley) and the UK (way too many to mention). At least we’re still ahead of South Africa. The French Canadian film industry is also surprisingly productive, despite their admittedly small target market, and have won considerable acclaim. English Canadian cinema has not fared as well in the interim.

I think part of the problem is the type of films Canadian cinema is famed for producing. Whereas French productions are known for gritty streetwise crime films and despondent black comedies, mainstream Canadian films are a very different animal. Many are insufferably “artsy”, distant, chaotic and largely unwatchable. Perhaps this is in response to the dominance of the American based industry, a misguided attempt to distinguish our cinematic style. Unfortunately this has backfired and has often made our cinema a target of ridicule. Which is a shame because this country has produced many fantastic and often quirky films that could only spring from our unique perspective. Too bad few people beyond the sub-arctic ever get a chance to appreciate them. With a possible film making career in front of me (I stress the word possible) I have begun to examine my Canadian cinematic fore bearers for useful tips, stylistic inspiration and out of genuine interest. One of Canada’s finest underrated directors is Kingston, Ontario’s own Bruce MacDonald. Originally beginning his career as a documentary filmmaker this style would carry over into one of his most beloved films, Hard Core Logo. Now this film is commonly referred to as a mockumentary but anybody who has seen it knows that it far exceeds the confines of the genre, something the monumentally overrated This Is Spinal Tap (that’s right, someone actually said it for once) utterly fails to do. It combines elements of black comedy, tragedy and road movie into one of the single most depressing movies ever. 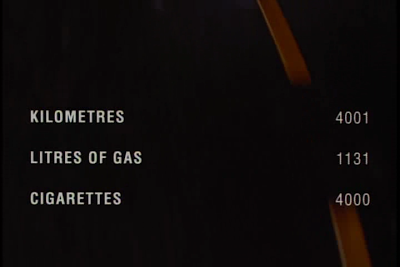 The story is elegantly simple and seemingly cliched. Members of a band which broke up with some acrimony are drawn back together for one last show and somehow embark on tour which ends up being a disaster. It is in the execution that Hard Core Logo truly sets itself apart and to call this movie dark would be a understatement. At the centre of the mobile horror show is acerbic Joe Dick (Hugh Dillon, who was himself a punk rock front man with the Kingston band The Headstones). Joe is immature, aggressive, egotistical, deluded, manic and heartless, pushing away anybody close to him with a torrent of spit and profanity. Despite being dedicated to music and the (by this time) fading Canadian punk scene, his best efforts are routinely stymied thanks to his own failings. He is a manipulator, a deceiver and a bully who chides the other band members for being selfish but flies into a rage whenever someone interferes with his ambitions. A frequent target of his abuse is his longtime friend and guitarist Billy Tallent (played by the always excellent Callum Keith Rennie); a name which has become famous today thanks to a shit house Canadian rock band. Billy is well meaning, soft spoken, talented and for once achieving some real mainstream success but has come back to do a reunion gig out of loyalty. This of course immediately makes him a target for Joe’s resentment and jealousy. The band is rounded out by the boorish and insensitive drummer “Pipefitter” (Bernie Coulson) and the gentle but mentally ill John Oxenberger (John Pyper-Ferguson). After the reunion gig is successful, Joe berates and cajoles the others into embarking on a whirlwind tour of clubs and rat hole bars in such cultural hot-spots as Saskatoon, Winnipeg and Calgary.
Crowded in a tiny van the band and a film crew (with Bruce MacDonald playing a fictional version of himself) trundle along the back roads of Western Canada in the dead of winter, which shows the viewer just how bleak much of this country really is. 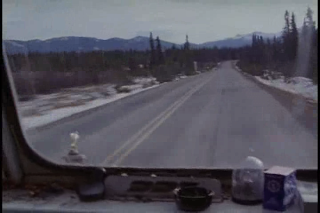 The situation in the van quickly degrades as John soon loses his medicine and finds himself a constant target of abuse, Joe becomes increasingly jealous of Billy’s personal growth and talent while Billy himself may have lost all he has worked for by embarking on the largely unprofitable tour. While some glimmers of the deep friendship between Joe and Billy show their relationship is largely marked by conflict. It doesn’t help that Pipefitter is a drunken ass and John grows increasingly unstable. A series of fights, meltdowns and one of the craziest acid trip scenes ever later and the band has reached breaking point. In a moment of tension Joe snaps and consumed with pettiness, single handily destroys his chance at redemption on stage. What follows is an unbelievably depressing but fitting ending.

Hard Core Logo is one of the few films this country has produced which is universally hailed as simply an excellent film (as opposed to an excellent Canadian film) and rightfully so. The film is gritty, well shot, remarkably written and disconcertingly realistic. It isn’t hard to believe that such a band could have actually existed or that something very similar to it most probably did. Probably more important for me is that Hard Core Logo demonstrates that as a Canadian filmmaker (potentially) I could create a memorable film of some quality with the resources and talent found right here in my own country. This is an incredibly important confidence booster as I will most likely have to cut my teeth (potentially) on similar films. Films where budgets are low, the work considerable and the standards high.