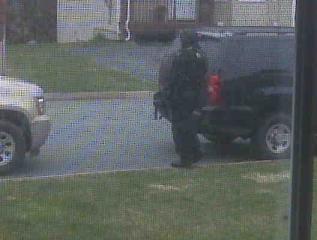 
On April 26, 2011, 7:51 PM, Halifax District Tantallon RCMP received a complaint from a 17-year-old male that he was a victim of a kidnaping and assault.  The victim told police how an 18-year-old male and 17-year-old youth unlawfully confined the victim to a room at the Seasons Motel Inn in Halifax.  They demanded the victim bring them cash from a bank machine and other property.  The two males also assaulted the victim and threatened him with a firearm, forcing the victim to drive the suspects around to local pawn shops.

On April 27, 2011, 3:42 PM,  Members of the Halifax District Integrated GIS and RCMP Emergency Response Team executed arrest warrants and conducted a search of a residence on Greenwood Avenue, in Timberlea, Nova Scotia.  One of the suspects was located and arrested.

Eliahs Kent, 18, appeared in court earlier today.  He faces numerous charges under the Criminal Code of Canada, including:

The RCMP/HRP Integrated GIS is continuing to investigate and are looking for another 17-year-old suspect.  Anyone with information is asked to contact police.