In a city filled with ample opportunity for Greek dining, I have to say that Opa Greek Taverna has always been my restaurant of choice. That’s not to say that there isn’t another great Greek restaurant in the city. Opa just happens to be the one I invariably find myself at when the craving hits me. It doesn’t hurt that a second location opened up near my neck of the woods in Bayer’s Lake Industrial Park.

Considering the dining options in the area consist either of fast food or big box chains, Opa has brought a little bit of class to an otherwise grim sea of mass consumerism. It also turns out to be a perfect option for dinner and a movie. Which is what we did with friends the other week. 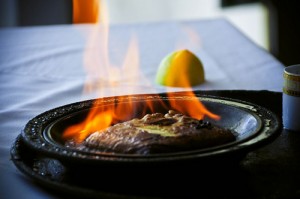 One of my guilty pleasures at Greek restaurants is ordering a dish that is essentially flaming salty cheese.

The saganaki Opa is pan fried Kefalograviera cheese with lemon, flambéed in brandy. ($11) Bad for your arteries? Probably. But everything in moderation, right? The saltiness is cut perfectly by the lemon and shared among friends, you can split the calories.

For my main course, I went with the stuffed tomato & pepper “yemista”: stuffed with rice, grated eggplant, zucchini & tomato served over house made yogurt, sprinkled with feta. Served with Greek salad. ($16) With the meal I had a glass of retsina, a white wine that has a distinct pine taste and goes incredibly well with the food from this region of the world.

Cokebaby had stuffed chicken “kota yemisti”:  spinach & goat cheese, topped with a saffron cream sauce. Served with choice of potato or rice, and daily vegetables. ($20) With his meal, he had the Opa ale which was quite nice (not bitter or overly sweet).

We also shared a side of Opa lemon potatoes: oven roasted in olive oil, lemon and garlic. ($6) I have to admit my eyes are sometimes bigger than my tummy, so I had almost a whole stuffed pepper on my plate by the time everyone was finished their meals. No matter though as it made for wonderful leftovers the next day.

And the mousaka: seasoned ground beef & lamb in tomato sauce on a layer of grilled eggplant, zucchini & potato, topped with béchamel. Served with Greek salad. ($16)

Everyone left full and totally satisfied with their meals. But I’ve found that’s always the case. And that’s what keeps us coming back. As for ambiance, it’s not quite got the outdoorsy feel of the downtown location but there’s still a warmth and charm about the interior that is very welcoming. The service was also impeccable. We informed our waiter of the fact that we were catching a film at a certain time and he ensured our food was delivered in a timely and pleasant manner.

If you’re in Halifax, don’t forget to check out the Greek Festival this weekend. Running from June 12-14, the festival features a variety of entertainment AND of course lots of amazing food. If it’s your first time trying Greek food, it’s a great way to do some sampling. My fave spot is the cafe where they serve Greek coffee and some amazing desserts including one of my favourites: Galaktoboureko.