“I know you’re in there, so do you think it’s time to come out and meet us yet? Pleeeease?”

In all seriousness, I’m not as impatient being 5 days overdue as appears is everyone else!  I am of course excited and anxious (understatements) to meet our little daughter or son (it sounds so strange to refer to the fact of having a son or a daughter!), but all we can do is wait for s/he to make his/her grand entrance.

Yesterday I followed up with my doctor (per shenanigans of Thursday) and everything is great and little peanut was beating away at a healthy 145.  I am scheduled now to be seen in “post dates” at the IWK on Thursday, along with a follow up ultrasound just to have another check in.  So since we are now into the “post dates” course of progression, I decided to go ahead with the membrane sweep at my doctors appointment yesterday.  I figured it was one step I could take more on the “natural” side of encouraging things to move along before any other options are presented when seen by the other doctors in “post dates.”  My doctor explained that there is evidence to show that it can be effective, but only if your baby and your body is ready, so I decided to go ahead.  All in all, it wasn’t as bad as I anticipated and managed just fine.

It was a beautiful day in Halifax and the doctor encouraged lots of walking and activity so I figured I would take advantage of being downtown with no schedule, appointments or place to be, no baby to tend to (that will soon be my life :-D), so I met a friend downtown and we walked down to the water front to check out The Buskers and enjoy the day.  Neither of us really ever has much opportunity to just spent “time” downtown and explore, so it was a great opportunity!  In retrospect, I should have taken wayyy more pictures, but there was one photo op that we stumbled across on Spring Garden Road that I knew would be fun to share on the blog.

We walked by this tree that had a knitted quilt wrapped around it with lots of notes clipped with clothespins: 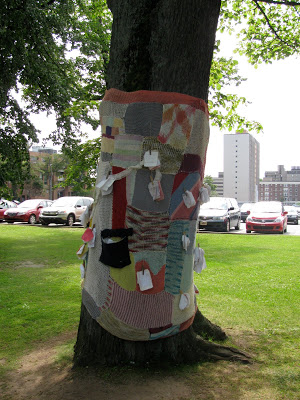 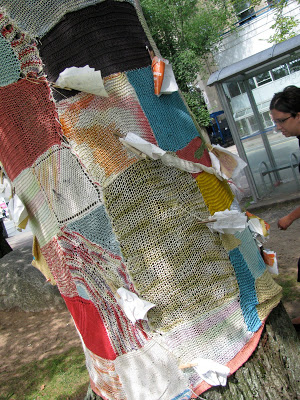 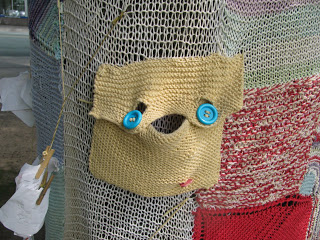 All of the notes appeared to be positive notes of advice and quotes (I wish I had of photographed a few of them – doh!), but of course you will probably guess the first thing that came to my mind was to join in and share in the positivity a la Operation Beautiful: 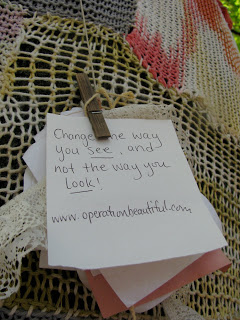 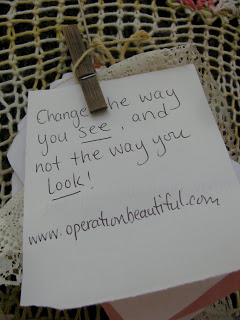 I didn’t notice any “Operation Beautiful” notes on there specifically, but nearly every single one of them fit the bill and I thought it was really neat that we had a similar movement, likely unrelated to OB randomly along the public busy street of Spring Garden Road.  There didn’t appear to be any instructions or explanation with the tree, but I think the idea spoke for itself.  If anyone knows anything further about the tree, I would be very interested, so please share!

My camera pretty much stayed in my bag for the rest of the day, but Jacki and I enjoyed a lunch down at the Hart and Thistle sitting outside along the harbour front, sat on a small patch of grass to join a friend who is a nanny and who had many little kids on tow to see the Buskers, perused the boardwalk, decided we’d try the “freak show” trailor for a little “maybe a little spooky fun will bring on labour” idea (verdict = totally lame and not at all worth the $7.50 and was like a sauna in there), got a freshly squeezed lemonade that I always get when The Buskers are in town, watched Bendy Em contort herself into a 16″ cube (Oh.Em.Gee is all I have to say!) – I snapped a BB pic while she was putting her stuff away and here she is and yes, she does fit into this little box and she is an incredibly fit and muscular: 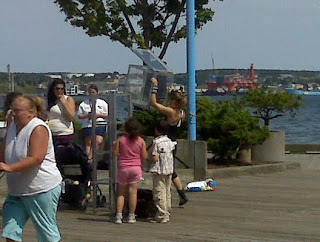 Noticed a submarine cruising by in the harbour and snapped a BB pic too: 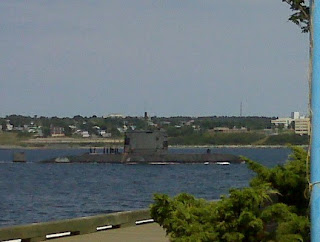 I really should have had my real camera out all day!

Then we figured I had probably had about enough being out downtown because I still had to WALK back up from the waterfront back up to Spring Garden where we were parked!  Anyone familiar with Halifax knows that the downtown is one big hill.  Sure it might not phase the average person, but when you’re 40+ weeks preggers, it’s a BIG deal!  But I figured it would only “help” our little overdue “situation” so off we went and we chugged all the way up!  I had to sit on the benches outside of the public library for a bit, but I was only slightly worse for wear.

I had continuous cramps the entire day from the sweep, but nothing I couldn’t handle, and walking all day added some pretty major back pains, so by the time we got back up to Spring Garden and stopped at Starbucks for a shaken passion tea lemonade (sooo good on a hot day!), I did have what I suspected to be a contraction or the beginnings of one while standing in line.  It was more like 3 consecutive sharp pains shooting up from my lower abdomen where I was cramping and it made me stop and listen really quick!  For a while I thought “Yay! My fun day of activity was working!” We went up to the husband’s office which is nearby and sat for a bit before heading home for the day.  I was feeling completely spent and achy and tired and sore, so when I got home, I got into a bath for a long while and it helped a lot.  I was completely tired and ready for a good night’s sleep.

I had a decent night’s sleep (this is of course a relative term adopted when you are pregnant and realize you will never sleep the same way you did “before” again!), and today I feel a bit sore and still a bit tired, so I’m going to just relax at home.  We do have friends who are in town with their new baby as well, so if I’m still on labour standby, we’re going to join them out for supper.  I’m thinking something spicy? 🙂