Over the years, we have seen many poles badly damaged, and signs of aging poles can be seen on almost every street in the city.  So what happens to find and prevent damage to power poles in our city? NSP says that they have various ways and times to inspect both sets of poles.

Transmission poles, vital to providing larger doses of power so the smaller poles can distribute power into our communities, are inspected in q or 3 year intervals, or sooner if needed.  Inspections can be done in many ways, including by helicopter if an area is too remote to access by ground. 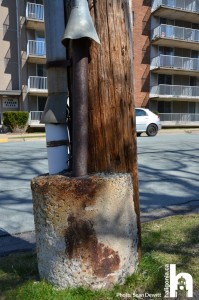 Distribution poles are inspected every 2 years, or sooner if required.

Both poles face the same inspection methods.  A pole inspection begins visually, looking for any obvious signs of damage from the base to the top, including if the pole is leaning or splintering.  A physical inspection is conducted to test see how the wood itself is holding up.  This can be done with a simple tap of a hammer to see how the wood reacts to methods designed to see if the wood is soft on the outside but still sturdy on the inside of the pole.

As an initial preventative, new poles are treated with various types of “weather proofing” that is designed to prevent wood rot from moisture and to prevent some insect and animal damage.  However, as poles age and begin to dry, the preventative measures fade, allowing the wood to succumb to the elements.  Power poles are not retreated as they age.  There is no specific time frame for how long this takes, as certain treatments vary from others, and different locations may have exposures unique to others. 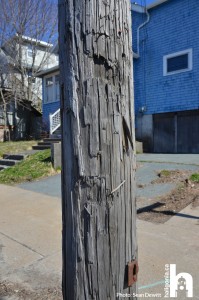 Some poles may have supports, such as concrete bases or ground wires, which also are checked for signs of damage.

NSP says that there are many ways a pole becomes damaged.  From basic wear from the weather, insect and bird damage, to damage caused by motor vehicles, either through accidents or snow plow nicks.  And in some areas, erosion may play a factor in the safety of a pole.

NSP says that there are no set “life spans” for the use of a pole.  The continued use of one pole from another will vary based on inspections or accelerated destruction of a pole via other methods.  They also say that should a pole be deemed unsafe that the process of replacing that pole is swift to try to prevent issues with leaving an unsafe pole in position for too long. 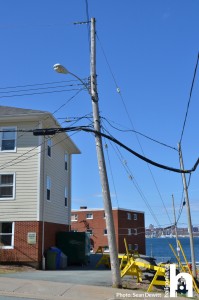 They also say that citizens are able to call in poles they feel are not safe and that crews will respond to areas to diagnose any complaints.

They have provided two numbers for people to contact them. 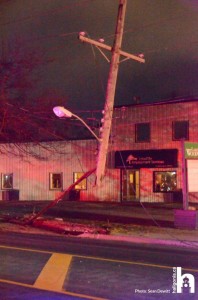 Our Aging Power Poles - What Do We Know?
https://haligonia.ca/our-aging-power-poles-what-do-we-know-141598/