Parenthood is always good, and last night’s episode was no exception. I think as this series has developed and as we’ve gotten to know the characters better, it’s been able to select characters to focus on in an episode without feeling as though it’s completely ignoring others. We barely saw Julia and Joel this week, but that’s OK – this episode focused on some characters and relationships that aren’t always showcased, as well as one relationship that tends to be the heart of the series. I’m talking about Drew, the relationship between Zeek and Camille, and the relationship between Adam and Crosby. These were the focal points of the episode, with a little bit of Haddie and Alex thrown in.

It’s all over but the crying – this is Haddie, so I expect quite a bit of crying. Alex dumped her this week (I hope we still get an occasional dose of Michael B. Jordan, though) and you had to feel bad for the girl. She really didn’t see it coming, she didn’t understand what she did, and she blamed it all on herself.

Of course, it was partially her fault. She acted like a brat at that party and got Alex into some serious trouble, and even though her parents helped him get out of it the situation had to effect their relationship. But she’s a teenager, she makes mistakes, and she seemed to learn from the experience so you can’t fault her too much – and I say that as someone who’s not a big Haddie Braverman fan. But at the core of this breakup was the fact that Alex has some issues to deal with of his own.

Once it was revealed that he had a criminal record, Alex just didn’t feel comfortable with Haddie and her family anymore. It had nothing to do with how they treated him – the information didn’t seem to change him in their eyes. It was his thing, he needs to figure out how to not be ashamed of his past. I was a little surprised that Alex’s character developed this way, but they likely just needed a way to write Michael B. Jordan out of the show. (If he had other acting obligations or something.) Considering how open and honest Alex was about his past with alcoholism and homelessness, it surprised me that he was so ashamed of his criminal record. I know it’s not anything to be proud of, but he was in a terrible situation and that’s not who he is anymore. For god’s sake, he could probably talk to Julia about getting his record expunged. Anyway, for Alex it was still emotional baggage and after the incident with the party, it came between him and Haddie.

I’m not going to lie, I felt a little weepy when Alex said goodbye to Kristina. There was a lump in my throat. It was a really, really nice moment since Alex had been welcomed into their family so warmly. (Although a part of me said “This is why you don’t get close to your teenage kids’ boyfriends or girlfriends!”)This scene really saved the storyline for me. It reminded me how much the Bravermans had really helped Alex and how much they meant to him, even though a relationship with the much younger and less mature Haddie just wasn’t in the cards. The breakup rang as truthfully as possible, considering it clearly had more to do with the actor’s contract than the intended story arc for these characters. 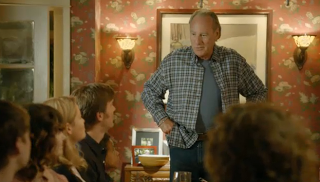 Since the beginning of the series, Zeek and Camille have had problems in their relationship and they’ve usually been thanks to Zeek. What I liked about their storyline this week was that Camille was really the one with the issue.

First of all, Zeek booked a hilarious commercial – it was for erectile dysfunction medication. Watching the reactions of the whole Braverman family when he announced the news was hilarious – one of my favorite parts of the episode. Especially Sydney asking “What’s a reptile dysfunction?”

Zeek had such a good time doing the commercial that he wanted to pursue acting more, even though the idea was a little bit crazy. Camille was distant and mopey, but only because she was jealous. Not of the hot younger woman Zeek was kissing in the commercial, but of Zeek’s fearlessness and attitude. As Camille told Sarah, she’d been painting for 30 years and had never had a show. I liked that Camille was aware of her feelings and instead of getting petty was able to use Zeek for inspiration to pursue her own passions, like painting or learned a new language. The storyline ended with the two of them making love…without the aid of the product Zeek was pushing.

Zeek wasn’t my favorite character at the beginning of this series, but he’s really grown on me and I love how well his and Camille’s marriage is being portrayed. They’re no Coach and Tammy Taylor, but Jason Katims knows how to write genuine relationships and I like seeing how Zeek and Camille have managed to overcome difficulties and stay together. They’re very different people and have different interests and attitudes towards life, but they love their family and they love each other, and that really comes across on screen. 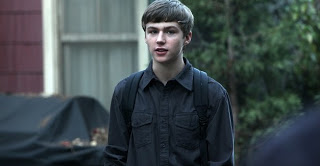 I’m so glad to see Drew getting some material on this show. He did very well with the stuff about Seth last season, but let’s face it – Mae Whitman shone so bright it was hard to notice anyone else. But I think because the character of Drew is supposed to be so painfully shy, it makes sense that we’ve seen so little of him thus far. He’s that family member, the one who doesn’t say much and can be really hard to read. But now he can come into his own a little.

And poor Drew, huh? It was so hard for him to ask Amy out, and then their date was a disaster. He wasn’t talking, so Amber (who graciously agreed to play chauffeur) tried to make conversation. It turned out that she and Amy had a lot in common, and Amy jumped into the front seat and into a passionate conversation about music…with the chauffeur. Ouch.

Adding insult to injury, Drew arrived at school Monday morning to discover a picture of Mr. Cyr kissing his mom outside the school was spreading across campus like wildfire. Nice. (Also, smacked a little of Lauren Graham’s days as Lorelai Gilmore, making out with Max Medina in an empty classroom. But this was much more innocent.) Drew freaked out and dumped a lot of information about his crazy family on Amy. (My aunt is trying to buy a baby!) Luckily, girls dig it when a dude opens up, and she was throwing pebbles at his window that night. It was pretty damn cute. Also, I love how unskilled Drew was at sneaking out of the house. But I’m sure even if Sarah saw him sneaking off with a girl, she’d just be relieved that the poor kid was getting a second chance.

I’m glad Drew realized he was overreacting about the photo because I like Sarah and Mark together and I don’t want them to put the brakes on again. Although the return of Seth this season might do it even if Drew didn’t.

The storyline with Max and Jabbar, and therefore Jasmine, Crosby and Adam, was complex and well executed. Jabbar was tiring of eating lunch with his demanding cousin every day, but he didn’t really know how to say no to Max. He asked his mom, who asked Crosby to talk to Adam about it. So far, so good. But it was more complicated than Jasmine could really understand, because Adam delivered a heartfelt thank you to Crosby and explained how much Jabbar’s friendship meant to Max before Crosby had a chance to address the awkward situation.

I mean, what would you do in Crosby’s situation? I feel like even though he didn’t necessarily do the right thing, I can really see myself making the same move. After hearing what Adam had to say, Crosby couldn’t face telling Adam that his son didn’t really want to hang out with Max. So instead he told Jabbar that sometimes you have to do things you don’t like because of family obligations, because family is important. And then he had to explain why Max doesn’t have any other friends…I didn’t really think that anything Crosby said was that bad, but “Max has a few problems and doesn’t make friends easily like you do” was reinterpreted by a five year-old as “There’s something wrong with Max and that’s why I’m making you be his friend.” Crosby is new to parenting and as someone who doesn’t have kids, I can totally see how he thought he was handling the situation well. I know the responsibility of helping out Max was too much for a kid Jabbar’s age, but again, I could see why Crosby might try and explain it to him that way.

Instead, Jabbar wolfed his lunch down so he could be done with “lunch” and go play with his friends. Max freaked out at the change and the two kids got into a fight. Parents were involved, what Crosby had said to Jabbar came out in the worst possible way, and no one left the school happy. Jasmine was mad at Crosby because he hadn’t followed her instructions and Adam and Kristina were mad because he’d said there was something wrong with Max. It was one of those ugly family situations, made even worse because on top of being brothers Crosby and Adam are now business partners.

The scene where Crosby and Adam celebrate after finding out they got the loan could be interpreted as “everything always works out in the end on Parenthood,” but I see it differently. Crosby and Adam have already had somewhat of a falling out, and I think they both learned from it. They’re brothers, they’re business partners, and they have to get along no matter what. I think they both realized that what they needed to do was put the conflict with their sons aside and move on. If they were friends it would be different, they’d “break up” and never have to see each other again – but they’re family, they’re stuck with each other.

OK, there was a lot to talk about from this episode, but I’m done. Now it’s your turn – what did you think of “Clear Skies From Here On Out”? And of course, here’s a list of a few gems from the episode: