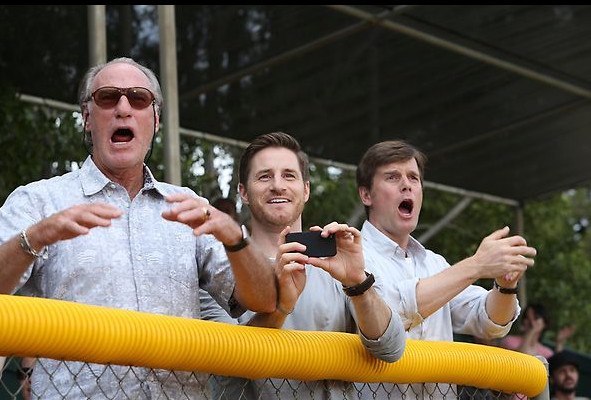 Here’s what I love about Parenthood: every time I’m worried that something will be too sappy, unrealistic or uncharacteristic, they do exactly the right thing. So many shows don’t.

For example, when Adam and Kristina told Haddie about her mother’s breast cancer. I immediately thought “They’re doing this wrong. Stop telling her to focus on school. Her mom is sick! She can’t possibly focus on school. They need to talk to her like an actual person.” I thought about my relationship with my mom when I was Haddie’s age, and how I think my mom would actually talk to me. And then Haddie called back and said what I was thinking – that she needed more information, that they should talk to her like an adult. She asked her dad how he was doing. She was upset, of course, but she handled it with maturity.

Or when Crosby told Adam that they needed to talk more about the salary issue, and chewed him out for being a jerk lately and sending Amber on personal errands. So many writers would have had Adam respond with “Yeah, well my wife has cancer.” And in that moment, I felt like that thought crossed Adam’s mind. But it wouldn’t have been fair to Crosby, and it would have been out of character for Adam. Crosby doesn’t know about Kristina’s cancer, and saying it right there and then would have unfairly made Crosby feel like a horrible person for asking for more money.

The third example is when Victor went up to bat. The Bravermans were being typically obnoxious, in that totally lovable, tight-knit family way. (I loved how when Ryan chimed in, Amber quietly said “You fit right in.”) And I thought “Victor has to strike out. It’s the realistic thing.” But what happened was even better. Victor hit the ball, and then we got a slo-mo visual of just how bad every single kid on both teams is. It was shot like a winning championship game on Friday Night Lights, but it was the worst baseball playing anyone has ever seen. Sure, Victor sucks. But they all pretty much suck. It was perfect.

*Sidenote: In case you were wondering, Ryan went with Amber and the kids to the arcade when Kristina broke that news. And yes, had he not, that would have been super weird. It’s even still kind of weird, because eventually he’d come back from the arcade and everyone would be crying. Since we knew that moment was coming, I felt like a lot of the episode was a buildup towards it. But the rest of the material was also good. Zeek put in the effort with Ryan to build a friendship, and I think we’ll definitely see something between Ryan and Amber develop. I loved the repercussions of Hank kissing Sarah. Their conversation afterwards was so awkward and really good acting from both Lauren Graham and Ray Romano. Her reaction is to throw herself full force into her relationship with Mark, with “Let’s go jogging! We’re such a good couple! I love us!” and the decision to move in together. It’ll be bad for Drew, and I think it’s a sign that she’s not confident in their relationship. And I liked seeing Jasmine and Crosby talk about money. I think, a year after opening the Luncheonette with business going well, it was time for Crosby to talk to Adam about evening out their pay scales.

I thought the best storyline, though, was Julia’s. It just felt so real. It’s hard to be a working mom, but Julia’s situation is even more complicated. She’s got two kids, one with special needs – Victor is newly adopted and has issues, so I’d call that special needs for now. Her attention is on him, it’s a stressful home situation. And she has a very high pressure job. She’s responsible for millions of dollars, with demanding clients and bosses who aren’t sympathetic. It was understandable that she’d make a mistake, and it was realistic that the mistake would be taken very, very seriously. The panic attack she had while making breakfast felt very real. What a lot of pressure – it’s natural that Sydney would have some feelings of jealousy with a new brother, and her mom missing the dance recital would have been a big deal to her. I didn’t feel like she was acting bratty, it was just normal kid behavior. In a recent review, I said that for that storyline to feel real we’d need to see some bad behavior from Sydney, and this felt right. In the meeting with the partners, Julia knew she couldn’t promise to devote all her attention to work. Lawyers like that work crazy hours, and she can’t do that anymore. Quitting felt like the best decision for her, and a realistic choice for the show to make. I’m interested to see where the writers will take this one.