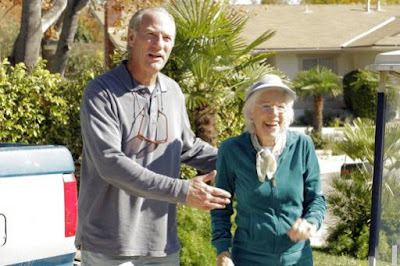 Oh Parenthood, I missed you over the holidays. So much so that, when my DVR skipped a little during the early moments of this episode last night, I repeatedly cried out “No! But this is my FAVORITE show! It’s my FAVORITE!” I tend to overreact when it comes to TV.

Parenthood is often at its best when it deals with conflicts within the family, both big and small, and “Road Trip” nailed those moments. The premise was both big and small – the whole family was scheduled to take a road trip across California in honor of Zeek’s mother’s 86th birthday. That was big – having all the actors interact together for the whole episode, the California landscape, the hectic chaos of organizing such a trip. But the moments were small – conversations in cars, awkward silences, underlying tension. At the center of everything was Zeek, who had put a tremendous amount of pressure on the trip thanks to his strained relationship with his mother and had trouble letting anything go, from minor to major disappointments.

Things started out rough. On the lighter, funnier side, poor Drew accidentally walked into the guest house to find his mom having sex with her boyfriend. Who happens to be a teacher at his school. Yikes. Poor, naive Drew. Your mom has a hot, younger boyfriend! Never walk in anywhere unannounced! That meant Drew was unnervingly quiet throughout the entire trip (he’s so quiet normally, how could they tell he was upset?) before eventually spilling the beans to Amber, who clued in Sarah. With all the drama going on elsewhere in the family, I liked seeing this awkward yet hilarious storyline play out. There was no resolution – Sarah tried to talk to Drew about how “moms are people too”, but there’s no going back from something like that. You can’t un-see something.

On a more serious note, Max is growing up and that means his temper tantrums are becoming more vicious. After he repeatedly ignored Kristina’s requests to turn off his video game because it was time to leave for the trip, Max called his mom a bitch. It was so sad, to see the combination of pain and anger on Kristina’s face. As punishment Kristina cancelled the trip for Max, and stuck to her guns since Max pointed out, she so often doesn’t. Kristina is often depicted as so rigid and organized in how she deals with Max, I thought this seemed like a subtle hint at how hard things have been for her since having a baby and going back to work – she hands down punishments to Max and then forgets about them, and so he doesn’t take them seriously.

Of course, Zeek was upset to find out that Kristina, Max and the baby wouldn’t be coming on the trip and he just wouldn’t let it go. He harped on it over and over again, making the situation just that much worse. As frustrating as it was to watch Zeek, it was also incredibly familiar. That’s what happens when you have really high hopes and expectations for a plan – you’re devastated when something goes wrong.

The next thing to go wrong? While Zeek was in the diner bathroom being a jerk to Adam, someone stole the armchair he’d bought for his mom’s birthday out of the back of his pickup truck. Naturally, Crosby was the one who was supposed to be keeping an eye on it.

But the big moments weren’t even the best parts of the episode. It was stuff like Adam’s frustration as he tried to have a meaningful conversation with Haddie while she texted friends and giggled (so annoying) and the juxtaposition of Crosby loudly singing along to kids’ tunes in the car while Julia and Joel looked about ready to rip their own ears off.

The whole family oddly spent the night at a motel, even though the road trip they were making actually wasn’t that long. There, things got really heated – all along we’d been learning more and more about Zeek’s mom and his relationship with her. The writers did a great job of making sure that none of that came from Zeek himself, though. The kids all slowly clued their own children, and the viewers, in on exactly why she was “kind of bonkers”. (Of course she openly disapproves of Sarah and Crosby, but gave Julia five bucks every time she won a spelling bee.) Camille clued her children in on what things were like for Zeek growing up, how his mother wasn’t supportive of him or his dreams. As it was slowly revealed why the stakes were so high for Zeek on this trip, I became less and less annoying with his behavior towards his family.

It all culminated in Zeek telling everyone that they sucked for not being cooperative enough and taking off from the motel early in the morning, and the four kids collectively decided not to follow him. It was understandable – they were hurt by his words, they didn’t feel like apologizing when they didn’t feel guilty, they felt their efforts to make the trip happen went unappreciated and they wanted to go home.

In the Parenthood world things often work out just fine, something that you can either see as a flaw in the show or a result of the fact that just like in life, this is a large family that has their problems but are still very close. Obviously, I see it as the latter. People get mad, but they love each other. Kristina stuck to her guns even as Max tried to earn back the trip by cleaning his room and preparing dinner (was dinner only a large bowl of carrots?), but when she helped him unpack his suitcase and saw a sweet, thoughtful birthday card he’d made for his great-grandmother she realized she hadn’t just taken away a fun trip, she’d taken away the chance for him to bond with his family. The gesture of the birthday card is so rare for a kid like Max, and Kristina knew it was special. So she dropped $500 on airfare and arrived at Grandma Blanche’s house before Adam and the rest of the Braverman kids did.

Meanwhile, when Haddie finally opened up to Adam about her fears about going away to college and no longer having a close relationship with her dad, Adam realized how wrong he’d been in abandoning the trip. So all the kids turned around, and arrived at Grandma Blanche’s house just after she came home from her bridge game, which Zeek couldn’t believe she’d scheduled on the day they were all due to arrive. It was a wonderful, messy, complicated mix of family relationships and emotions, disappointments and surprises.

I’ve written so much and I still feel like I haven’t even scratched the surface of all that was great about this episode. How about that moment between Zeek and Kristina? We know Joel’s parents are dead – or at least one of them, my memory of the episode where Joel and Julia talked to Sydney about death is a little foggy. We met Jasmine’s mom, when she and Crosby were together. But extended family and in-laws have never been very present on this show. Now we learn that Kristina’s family isn’t that great, or that close, or whatever. So she really values what she found in the Bravermans, and how Zeek has always treated her like a daughter. As he was beating himself up for the way his anger and hurt had driven all his kids away, she reminded him that he’s also done a pretty good job building this strangely tight-knit family.

I tend to think almost every episode of Parenthood is great, but if you ask me this one has immediately found itself in “classic” territory. When I get this season on DVD, this episode will be one of the ones my sister and I put in to watch while drinking coffee on Christmas vacation. It’ll be and episode that I reference when other shows go on road trips, or when other family dramas attempt to pull off depictions of family tensions and expectations in a less amazing way. What do you guys think? Am I overreacting, or was this one really damn good episode?