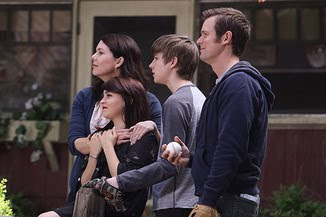 That sentiment applies to a few things, but first and foremost – I’m going to miss Parenthood. Season One was short, but left a big impact. If you haven’t been watching, I highly recommend catching up before the second season begins on NBC this fall.
After last night’s season finale, the “It can’t be over!” feeling also applies to Zeek and Camille, the quarreling patriarch and matriarch of the Braverman clan.

Tuesday night’s episode, “Lost and Found” was emotional and very subtly dramatic. The main source of drama centered around Sarah’s daughter Amber running away from home, but all the characters saw development in their story lines as well.

No Colors Anymore, I Want Them to Turn black

The episode opened with Haddie dying her hair – did she also have it cut too? As someone who admits to changing my hair color like some people change their jeans (especially when I was younger), I totally got it. I’ve had light, medium and dark brown hair, blonde hair, red hair. I’ve even had pink hair, or a streak anyway. Sometimes a girl just needs a change, and after all the pain and heartache Haddie went through after Amber slept with Steve, she really needed a change.

But apparently Kristina, her mom, was never a teenage girl because she was totally clueless when it came to her daughter’s new look. “She looks like a vampire from Twilight,” little brother Max commented. “I like it.”

The tension between Kristina and Sarah continued throughout most of the season finale, which was the most obvious fallout after the whole Amber/Steve/Haddie thing. I’d say Kristina needed to chill out and act like an adult, remembering that Haddie is only fifteen makes me empathize with her a bit more. I think Adam and Kristina were equally horrified at the thought of Haddie’s boyfriend pressuring her for sex as they were at the thought of Amber actually taking the guy up on it. Their daughter was punished for being the good girl, and that’s going to result in some bitterness.

That said, I totally root for Amber. The poor kid is just begging for someone to love her, and her mom tends to speak before she thinks. So when Sarah lost it at Amber after she’d just had enough of feeling like she’d caused a huge mess for her family, I felt really, really bad for Amber. Because Amber’s not a bad kid. She knew she screwed up and she felt bad about it. Amber and Sarah are actually a lot alike – they’re both compulsive, flawed and occasionally self-centered, but still so likable that you root for them.

I’m hoping we get to see a little more of Drew next season, because he managed to show his frustration with his family without much dialogue last night. The poor kid just wanted to make the baseball team, but Adam couldn’t help him train without pissing off Kristina and Sarah couldn’t stop arguing with Amber for long enough to throw the ball around.

In other stories, we saw Zeek blow off Julia’s attempt to solve his financial woes and Crosby make the decision to move to New York to be with Jabbar.

Julia’s friend Timm(mmmm) tried to talk Zeek into taking the deal he’d set up to help recover some of the money from Zeek’s bad investment, but Zeek was having none of it. And being Zeek, he was pretty rude about it. I was hoping Zeek was turning down the offer because he had an ethical issue with the business deal, but instead it was just his pride getting in the way. Man, that guy just can’t redeem himself in my eyes. He wants Camille back, but he doesn’t seem to be willing to do much to earn her. And Camille doesn’t seem to know what she wants. When Sarah, frustrated with her mom’s wishy-washiness told her “You don’t need an invitation to your own life,” she seemed as though she didn’t need the advice. But what does she want, other than space? Zeek tried to woo her with a song at the end, but they were sitting at opposite ends of the bleachers at Drew’s baseball tryout. This is definitely an issue we’ll see continue through the second season. 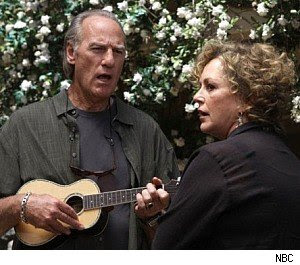 Jasmine continued to annoy me with the carelessness with which she treats Jabbar’s relationship with his father. In fact, in this episode she made me pretty damn angry. She didn’t tell Crosby about Jabbar, so she doesn’t really have a leg to stand on when it comes to not trusting Crosby. Jasmine had to move to New York by the end of the week, and in all the rush Crosby had to practically beg her to have a discussion about how they’d progress with her living across the country. Crosby and Jabbar are developing a great relationship – it was so cute when Jabbar called Crosby “daddy” for the first time! – and Crosby didn’t want Jabbar to think he’d been abandoned.

Crosby made the decision to move to New York to be with his new family, but based on how Parenthood relies to much on the interaction between the four Braverman kids, I don’t see it lasting long. The question is, under what circumstances will Crosby move back to California? I’m kind of hoping Jasmine breaks her leg or something, and moves back to Berkeley to teach dance.

I really liked how the finale culminated in the reconciliation of Haddie and Amber, and therefore their parents. Amber ran away after hearing her mother’s harsh words, and Sarah was panicked. She wasn’t with the gross former boyfriend – Sarah and Adam barged in on him with a whole new girl – but eventually Amber freaked out and called her mom from a truck stop. Kristina offered to go get her because she was closer, and Haddie insisted on coming. It was nice to see that when the chips were down, Kristina could move past her anger. She showed she really cared about Amber. I liked how we got to watch Haddie and Amber reconcile from the parents’ perspective, watching them through the glass of the diner.

What did you think of the season finale of Parenthood? Are you looking forward to season two – and hopefully, more episodes?

Parenthood: It can't be over!
https://haligonia.ca/parenthood-it-cant-be-over-18191/