Oh Parenthood, you get me every week. “In-Between” was another great episode, and one that definitely made my apartment feel a little dusty, if ya get my drift. 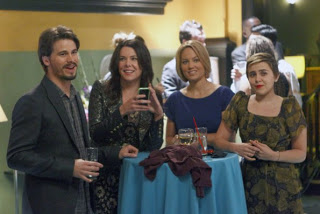 The strongest storyline in an episode comprised of all strong storylines for me this week was the one with Sarah, Seth and Amber. I think we’ve all been waiting for weeks for the other shoe to drop with Sarah and Seth, and I liked that when it happened it occurred in a less predictable way than it could have gone. As always, Lauren Graham and Mae Whitman really rocked their scenes this week. Even smaller scenes, like their little back-and-forth when Amber came to stay at the house and Mark was there, are just fantastic moments in the show.

Seth got out of rehab and checked into a motel which Sarah described as “the place you go to do drugs, not recover”. She couldn’t have been more on the nose, it was disgusting. Amber could see how concerned her mom was and offered to let Seth stay at her apartment until he could get back on his feet. It was a really sweet offer, and I liked seeing how Amber acted around her dad. She was cordial and pleasant, but she also made it clear that she was making the sacrifice for her mom.

When a drawer of stuff tumbled to the floor at Amber’s apartment, Seth saw that she’d saved a card he sent for her eighth birthday. It was probably the only one he’d ever sent her and, once again, Seth talked to Sarah about what kind of family they could have been if only he’d gotten clean sooner. They kissed.

Back at home, Sarah talked to her mom about feeling conflicted over Mark and Seth while Amber listened outside. I honestly thought that Sarah would end things with Mark, who was about to meet her entire family for the first time, and that the decision would drive a wedge between Sarah and Amber.

Instead, the show went a more surprising route. After seeing her mom so happy with Mark, Amber went home and told her dad that he needed to stay out of the way. It was tearful and heartfelt and painful, but a really beautiful scene. Seth understood, and he told Sarah that he’s leaving town.

Before taking off, Seth left two envelopes for Amber and Drew, filled with all the birthday cards he’d missed. It was an emotional finish to what’s been a really good storyline for Parenthood, and I hope that we continue to see John Corbett as Seth from time to time. I loved watching Sarah struggle to keep her life together while still supporting his recovery, but I’m really glad she’s staying with Mark. I’d love to see the show continue to check in with Seth as the series progresses, and to see whether he can stay sober and rekindle relationships with his children.

Now that Seth is out of the picture, at least for now, I hope we can see Sarah become fully invested in her relationship with Mark. It was so cute to see them together at the party, and I really like their chemistry together as a couple. I don’t think she should tell Mark about her kiss with Seth, because that’s over now. I want to see things work out for Sarah and Mark.

Another storyline I’ve really been enjoying is Crosby’s issues with Dr. Joe’s presence in Jabbar’s life. Everything he was feeling this week, I think I would feel too. If I were reading all seven Harry Potter books with my kid and someone else watched one of the later movies with him, I’d be bummed. It ruins a thing that we were doing together, and I can get really sensitive and uptight about stuff like that. I think Crosby can be sensitive like that too. And when Crosby heard that Dr. Joe was planning on taking Jabbar to his first ever football game, it was too much – he went and told Joe that while he could be supportive of his relationship with Jasmine, some things need to be special between a father and son. 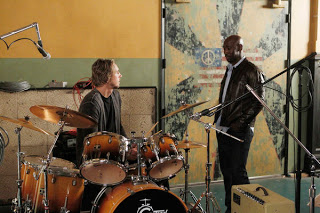 Joe took the high road and gave Crosby the football tickets, but he also made it clear that he’s serious about Jasmine and about being a part of her and Jabbar’s life. It seems like Jasmine and Joe haven’t been dating long enough for that kind of conversation, but I get it. I think Crosby and Jasmine need better communication about these kinds of things. If Jasmine knew that Jabbar had never been to a football game, maybe she should have asked Crosby if that was something he cared about. It’s a difficult road to navigate, and I think Parenthood is doing a really good job of showing both sides of the coin when it comes to this story arc.

I also thought a really nice moment was when Jasmine came to the studio opening party and told Crosby that he’d once told her he wanted to open his own studio, and that he should be proud. It was a really nice moment shared between two people who have a complicated history, but no matter what will always be in one another’s lives. Their history may not be as complicated as Sarah and Seth’s by any means, but it’s another depiction of how having a child together cements your relationship whether you’re romantically involved or not.

Meanwhile, Kristina is still struggling with everything that comes with having a baby, including feeling insecure about your body and decidedly un-sexy and the embarrassing experience of leaking breast milk. (I’m not a mom, but since I find almost everything embarrassing I assume that I will one day be embarrassed by that as well.)

Adam and Crosby had to hire a receptionist for the Luncheonette, and the best contender was clearly a hottie who’d dropped out of a Masters program to pursue her love of the local music scene. Adam was uncomfortable with the hire, but since Rachel had obviously been the best choice for the job Crosby won out and they hired her. Kristina, of course, was less than thrilled.

It’s a complicated situation. I mean, Kristina likely trusts Adam and doesn’t feel threatened by Rachel in that way. But if you just had a baby and feel fat and unlike yourself, do you love the idea of your husband hanging out with some scantily clad girl who looks like a supermodel? Probably not.

Kristina felt anxious about going to the Luncheonette opening party because she didn’t want to leave Nora and didn’t feel pretty in any of her clothes, even though Julia encouraged her to embrace her crazy cleavage. And cleavage is great, until it leaks all over your dress in front of the hot new receptionist. Oops! Adam tried his best to reaffirm to Kristina that she’s beautiful and he loves her, but sometimes these things just take time. And by the looks of it, that time was the following morning. Hasn’t it only been, like, six weeks? Isn’t there some kind of post-birth waiting period? Cool your jets, Adam!

It was just a small storyline, but I really liked Zeek this week. He was so hurt when he found out that he was supposed to babysit instead of going to the party, and then when he got there he realized everyone there was too young to reminisce about Haight Ashbury and Jefferson Airplane with him. He went back to babysit with Camille and dance around with all the little kids, and it was very cute. Another great moment was when he boorishly invited Drew’s girlfriend to the party. Poor Drew is so shy, he needs an obnoxious grandfather to help him move things along. He ended up asking Amy to actually be his girlfriend, you know, so they wouldn’t confuse the elderly.

What did you guys think of the episode? I have to say, I’m really impressed with how this season of Parenthood is shaping up. I say that constantly, but have they even had a weak episode so far this season?