Last week’s episode of Parenthood was, I thought, fantastic and an instant classic. But it was also a stand-alone that put almost all of the major story arcs on hold, so it made sense that this week’s episode would pick those back up again. While “Just Smile” wasn’t the kind of beautiful, classic episode that I thought “Road Trip” was (they can’t all be, and I didn’t expect two in a row) I thought it did a great job of reminding us where we’d left things with the Bravermans and making progress on those fronts. 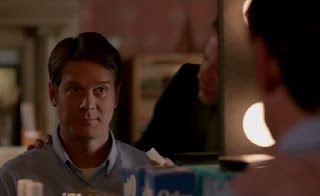 Adam and Crosby have been experiencing relative success with The Luncheonette, and that garnered them a story in a local weekly magazine. To me, this seemed completely plausible – I come from a small city with a larger population than Berkeley, and the revival of a cool recording studio seems like something that could totally land the cover of one of our local magazines.

Since Crosby is the music guy, it seemed obvious that he would be more of a focus in the article than Adam. The Luncheonette was his idea and his dream. He was being charismatic, joking about how “you could say that music saved my life” because his other career plan as a kid was to be Evil Knievel. When Crosby stepped out of the room for a moment though, the reporter started asking Adam questions and was more intrigued by his story – a guy who didn’t share his brother’s passion for music, who’d worked in the shoe industry for 15 years before suddenly finding himself out of a job “like many other people in America”. It’s the kind of thing reporters eat up with a spoon, and I liked that the show managed to acknowledge that. Adam ended up on the cover of the magazine, and Crosby’s involvement in the business was nothing more than an afterthought.

Crosby tried to act cool about it, but obviously he was angry and bummed. Who wouldn’t be? This is HIS dream! He wanted that acknowledged, and Adam was too busy soaking up the glory of having a cool magazine cover and having his autistic son think he was cool for once to realize that what Crosby needed to hear was that, yes, Adam realized that Crosby’s passion is what’s turned the Luncheonette into a success. I’m not ashamed to say that I would not have taken that well either. At a monthly poker night the guys were all ribbing Adam about his cheesy quotes in the magazine (frankly, I don’t think their jokes focused enough on that cover photo – he looked like a doofus!) but Crosby’s comments were more cutting. The brothers got into a fight, and Crosby found some comfort from a hot cellist who’d booked the recording studio.

I was surprised by how much I liked Courtney Ford as Lily, a neurotic and passionate cellist who was paying out of pocket to record her music. You might know her from Dexter (she played Trinity’s biological daughter and Quinn’s girlfriend Christine), True Blood, or a few smaller TV appearances. I was worried that I’d have her role on Dexter stamped into my brain too much to believe her as a love interest for Crosby, but I thought they had some real chemistry. It’s clear these two are going to hook up, and I’m hoping that it might be a more serious relationship than the other girl’s Crosby’s been involved with since things ended with Jasmine.

In the end, Crosby managed to suck up his hurt ego and hung a framed magazine on the wall in the Luncheonette, and Adam managed to get his head out of the clouds and realize that his brother deserved to be thanked for bringing the project to Adam.

Meanwhile, both Julia and Sarah made progress in the world of babymaking, in concrete and abstract ways.

For Julia, that meant using a hell of a lot of will power to respect Zoe’s privacy even though she was pretty sure Zoe was going to get back together with Troy. This hasn’t exactly been anyone’s favorite storyline, but I think Sam Jaeger and Erika Christensen have both done the best job possible with the material. I loved seeing Joel so protective of Zoe, not just because she’s carrying (hopefully) their baby, but because he wants what’s best for Zoe. Julia did too, but she knew it wasn’t right to interfere in Zoe’s life like that. She let Zoe make her own decisions and everyone came out on top. Well, everyone except maybe Troy, but no one likes him. Zoe ended things with Troy for good, and got him to sign the adoption papers. It might have been an ending that was a little bit too good to be true, but I like the idea that Zoe was able to make the best choice for her in the end. She’s a girl that obviously hasn’t had it easy, that hasn’t had a lot of support in life. Julia and Joel have tried to give that to her, and you can see it’s already helped her confidence.

Now that it looks like Julia and Joel will definitely be adopting Zoe’s baby, I’m really excited to see what they do with this storyline. Parenthood is good at exploring situations that are a little outside the norm, like having a child with Asperger’s or having an addict for a father. I think they could do some interesting things with having an open adoption, and I wouldn’t mind seeing Zoe as a recurring character on the show as the birth mother of Joel and Julia’s child.

Meanwhile, Sarah was freaking out because after Mark said “I can totally see having a baby with you” they never discussed the topic again. Even worse, he totally missed her incredibly obvious cue to pick the conversation back up (“Look! Tiny baby shoes!”) AND he seemed very hesitant to join in the very serious monthly poker game with her brothers. It turned out that was more because Adam was terrifyingly intense about the poker game, and less because Mark didn’t want to make a commitment. (Mark hesitating to commit to a poker game OBVIOUSLY meant he wasn’t serious about his relationship with Sarah. Well, that’s obvious when you’re freaking out that your boyfriend has rethought the idea of having a baby just as you’ve embraced the notion.)

I thought Lauren Graham was so great with this material – something that she also excelled at on Gilmore Girls was handling somewhat serious situations with a realistic sense of humor. Instead of having a scary, adult conversation with Mark, Sarah had a few cocktails with her sisters and then headed over to his apartment. Bad move, but one I think many of us would make. (Also, every time Parenthood gives us a scene where Sarah, Julia and Kristina have drinks together I love it. Those ladies have great chemistry.)

When Mark told Sarah he thought it was a conversation they should have while sober, I was worried for them. My boyfriend Rob said “Oh, they’re going to forget protection because they’re drunk, and in the morning he’ll tell her he’s not ready for a baby but then later she’ll find out she’s pregnant.” I didn’t want this to happen for so many reasons. First of all, Parenthood is not that dramatic of a show. Second of all, I want Mark and Sarah to live happily ever after. Third of all, I hate when Rob correctly predicts what will happen on one of my shows.

Luckily, that’s not at all what happened. In the morning, Mark and Sarah had a conversation about the baby thing and the result was that it freaks Mark out in a good way. Yay!

Amber’s storyline was one I could really relate to, due in large parts to my age and work experience. The part where she stared at the photocopier and said “people do this everyday…”? I have said that. Nothing makes you feel more like a moron that not knowing how to use a photocopier or fax machine. Having your first office job can be scary, especially when you feel as though you’re surrounded by people who all know what they’re doing. And Amber felt even worse when she realized that she was surrounded by interns who’d graduated from Ivy League colleges and assumed she must have an amazing resume if she got a real job as an assistant. Even though tons of people get jobs through family connections, it can still make you feel icky when it’s you. Mae Whitman was fantastic here, because you could tell how uncomfortable she was purely from body language.

Of course, Amber has a lot going for her – she’s smart and, more importantly, honest. When the candidate they’re campaigning for pulled all the young people into a meeting for a focus group, the Ivy Leaguers told him his commercial was strong and presidential. Amber was the only one who had the guts to say she didn’t like it, and she managed to say it in a diplomatic and constructive way.

Overall, I thought the episode was a great way to bring the audience back to the plotlines that had been set up for us in 2011. What did you guys think?

A few other thoughts: