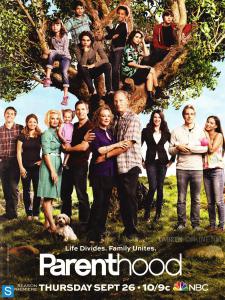 Of all the shows, I might look forward to the return of Parenthood the most. It just delights me. I was so happy to have the Bravermans back on my TV screen.

I loved catching up with where all the family members are, since some time (nine-ish months?) passed since the finale.

Crosby and Jasmine had a baby girl! I liked that the show depicted the stress and exhaustion of having a newborn (I mean, what I imagine it to be) but their bickering didn’t do a lot of favors for Jasmine, who can be unlikable under even the best of circumstances.

Sarah is single and living on her own, as the super in apartment building. I like this new direction for her, and seeing her try and cope with having no children at home anymore. Amber’s conversation with Drew was one of my favorite moments of the episode.

Hank is back, and bonding with Max over photography and being socially awkward. I look forward to seeing where this relationship goes, because I really like seeing those actors work together. I think it’s rather obvious that Hank will re-enter Sarah’s life, and I’m OK with that – as long as it is permanent. If Ray Romano is a guest star only, and a breakup is inevitable, I do not think that will be good for the show. Sarah needs to progress past the constant romantic turmoil we’ve seen in the past.

Amber and Ryan are together, but he’s back overseas with the army. In fact, at the end of the episode he proposed. Normally I hate when TV shows marry off characters too young, but I like Ryan and Amber together, so I’m OK with this progression. Amber isn’t a character typical of someone her age anyway.

Kristina is cancer free, and Bob Little is back in the picture – he asked her to run his mayoral campaign. Adam was sort of a pain in the ass this week, being all concerned about Bob Little and being all concerned about Max’s friendship with Hank. What a wet blanket. Instead of running a campaign, Kristina decided to run. For mayor. Of Berkeley. I’m not really on board with this plot yet – shouldn’t she run for school board or city council first? This seems far too unreasonable.

Julia is having trouble re-entering the workforce, thanks to her undesirable parting with her last job. I like that the show didn’t just ignore any repercussions of Julia leaving her previous job on bad terms, and Erika Christensen perfectly sold Julia’s reaction to being told that she seems like “more than just a stay-at-home mom”. I’m concerned about where the Julia and Joel storyline is going this season. Joel has a new female colleague named Pete, and I really hate the old trope of getting faked out by an androgynous name. Pete? Really?

There are a few plot points I’m nervous about, but if there’s one thing I know about Parenthood it’s that the show is capable of surprise. There have been storylines I’ve disliked before, but I often end up liking the material that comes out of it.