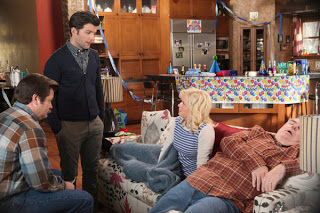 I really liked last night’s episode of Parks and Recreation, but unfortunately with one glaring exception.

It’s officially a terrible idea to put Tom and Ann together. In “Sweet Sixteen”, in which Leslie and the parks department threw a party for Jerry, Ann and Tom got annoyed at each other, broke up, and got back together. All the while including April in their relationship drama, which she wanted no part in.

When April first suggested Ann and Tom go out, it came from an understandable and genuine place. Tom was the only guy making Ann laugh at the Valentine’s Day dance. But now it’s just not working out. Each one can’t believe how uncool or annoying the other is. They got back together because they realized they were arguing over stupid reasons but, the thing is, they weren’t. Ann doesn’t know anything about 90 R&B music? Tom thinks embroidered Samuel L. Jackson style hats are cool? These are indications that you have nothing in common!

The one reason Tom and Ann could be a good idea is because it’s obvious it’s making Chris jealous, or at the very least making him question his own, lonely life. I wouldn’t be opposed to seeing Ann and Chris get back together.

OK now, with that out of the way let’s start from the top. This was a great Jerry episode. Of course Jerry was born on February 29! Of course his wife barely acknowledges his birthday! Of course no one invited Jerry to his own birthday party!

With her campaign in full swing and all her duties at the parks department, Leslie was stretched thin. So thin that Ron insisted she take a leave of absence but, of course, Leslie was resisting. She even forgot about Jerry’s birthday – although, wouldn’t she anyway? It’s Jerry.

Since Jerry was turning 64, but only gets a real birthday every four years, this was his sweet sixteen. So Leslie got to work on a party, hosted at Donna’s secret lake house, but then so many things got in her way. By the time she got Jerry to the party, everyone was asleep or out looking for Andy’s lost dog, Champion.

Finally, Leslie agreed to cut her hours down to ten a week, and luckily we found out that if she wins her city council seat she can maintain her position at the parks department.

This certainly wasn’t Parks‘ strongest episode, but I still think a weak episode of Parks and Recreation is better than almost everything else on TV. What did you guys think of “Sweet Sixteen”? Are you ready for this Tom/Ann (Tan?) foolishness to go away?

Parks and Recreation: Hit and a Miss
https://haligonia.ca/parks-and-recreation-hit-and-a-miss-54864/