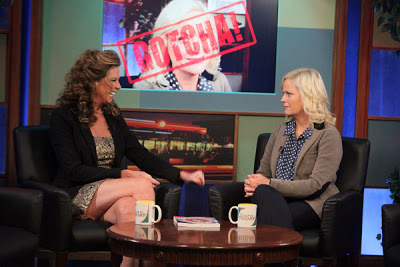 I can’t even count the number of ways last night’s episode of Parks and Recreation was hilarious and brilliant. I mean, parodying the Obama/Trump birther thing in a small town setting? Brilliant! Questioning Leslie Knope’s status as a true Pawneean (Pawneeite?) when we know how much she loves that town? Hilarious!

In “Born & Raised”, Leslie’s birthplace was called into question by the one and only Joan Callamezzo after she published a book about Pawnee. She loves the place so much that she literally wrote the book on it, guys. At first we were left wondering just where Leslie had been born, as she sought out her long form birth certificate to appease the voters. Finally, it was revealed – Leslie was born in Eagleton, the official Worst Place On Earth. Apparently the Pawnee hospital was overrun with raccoons at the time of her birth, so Leslie’s mom had to go to the next closest hospital.

Meanwhile, Leslie had hired Tom into scoring her book one of Joan Callamezzo’s massive book club stickers, and that meant coming uncomfortably close to ending up in bed with her – Tom used to have the safety of Joan’s husband. Since she was a married lady, it never went beyond intense, cringe-inducing flirting. But she’s divorcing and the cougar is on the prowl for that “adorable hunk of caramel” Tom, and apparently his super-nerdy friend Ben as well. The scenes with these three were all pretty funny.

The B-plot also had me laughing – before she discovered that the factual error Joan had mentioned was actually her own birthplace, Leslie had all of the parks department fact-checking her book – and Ann took this as an opportunity to make small talk with the two least social people in Pawnee, Ron and April. It was, of course, like pulling teeth…until she pulled out a few gruesome hospital stories and grabbed their attention. It was a simple storyline, but a funny one.

In the end, Leslie decided to come clean with the voters and admit that she had been physically brought into the world in *shudder* Eagleton. “You can’t choose where you were born, but you can choose where you live,” she told them.

This episode was packed with laughs, so here’s a (lengthy) smattering of what made me giggle:

Parks and Recreation: Pawned off on Pawnee
https://haligonia.ca/parks-and-recreation-pawned-off-on-pawnee-45891/