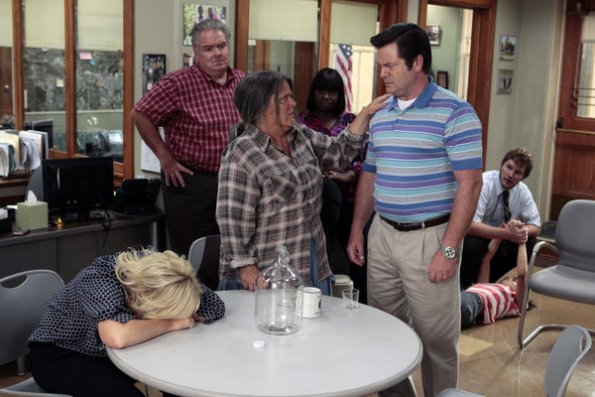 How many different ways are there to say “Parks and Recreation is the funniest show on television and you MUST watch it”? Because I feel like instead of writing a review that can’t even begin to do last night’s A+ episode justice, I should just type that over and over again.

I think what I liked best about “Ron & Tammys” was that it surprised me. The Ron Swanson that is under the harsh influence of Tammy 1 was not at all what I expected. No mustache? Friendly? A striped golf shirt? Oh my god, it was a nightmare. It totally threw me for a loop and it was freakin’ hilarious.

When we met Tammy 1 last week she wasn’t at all what I expected, and when we learned more about her this week she became an even more surprising character. She was a candy striper at the hospital when Ron was born, she taught him Sunday school and, among other things, their affair began when Ron was 15. She works for the IRS, but it turned out that Ron wasn’t actually being audited – she was only scoping him out as a retirement plan. The gold digger! (Literally, since Ron has gold buried all around Pawnee…or does he?)

Leslie, of course, was horrified by the new Ron. I mean, who wouldn’t be? HE NO LONGER HAD A MUSTACHE! When she couldn’t get help from Tammy 2, she went straight to the source, Ron’s mother – also, of course, named Tammy.

Tammy came to the rescue, but not under the terms Leslie had anticipated. Mama Tammy came to the Parks & Rec office with a jug of the Swanson’s own, toxic moonshine. If she won the drinking contest, Ron would return home to the farm. If Tammy 1 won, Ron would stay in her cold, terrifying grasp. So Leslie had to join in as well, drinking with the goal of getting the old Ron Effing Swanson back. Honestly, is there anything better than drunk Leslie? Luckily, Ron came to his senses and downed the whole bottle of moonshine himself. This was exactly what needed to happen, too – Ron needed to stand up to all the Tammys himself. Leslie winning him back would have been emasculating, and not very Swanson-ish at all.

Though Ron and the Tammys were the obvious focus of the episode, two subplots rounded things out nicely. It was great to see Ann and Chris interact again as they filmed a diabetes PSA together, and Ben helping Tom out with his new business venture was just ridiculous fun. Adam Scott has a rare capability of being able to make the straight man funny, and I loved watching his reactions to all of the insane things Tom and Jean-Ralphio had going on. From handing out free iPads to paying models $100,000/year with full medical to just sit around, two paying TWO NBA stars to just hang out and play ball, it was lunacy. And it was so great.

So clearly, I loved this episode. What did y’all think of it? And of course, a very long list of other awesome moments from “Ron & Tammys”: