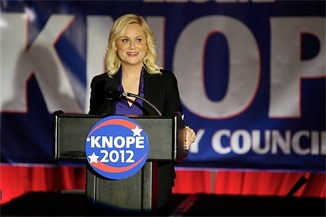 Um, guys? Is it normal to have experienced, dare I say it, actual feelings during the season finale of Parks and Recreation? Because there is perhaps, maybe, a slight chance that I might have been a little choked up. Whatever. My throat felt tight like it does when I cry, but maybe I’ve just suddenly developed an allergy to strawberries. That’s probably it.

So, Leslie won the election and will take her rightful place on Pawnee’s City Council. I’m happy with the conclusion of the election arc, because I’m excited about what fresh, funny material we’ll be in store for next season. People tend to have pretty strong opinions on the election arc, and whether they think Leslie should have won. I’m fine with the results, and I look forward to what it’ll bring next season. (Fingers crossed, of course.)

Leslie will be a Councilwoman, but it’s only a part time gig so I imagine she’ll still be in the parks department much of the time. Chris will stay on as City Manager. Ron decided to keep his position with the Parks department, where I presume April will continue to shoulder more responsibility. Andy might try to become a police officer. And Ben will go to Washington D.C. to work on a big time campaign.

The Ben and Leslie storyline was beautiful. Of course Leslie didn’t want Ben to go to D.C. She wants to have dinner like normal people. But after talking to Ron, she realized it was her turn to support Ben’s dream. I like the idea that Ben will get a taste of politics beyond Pawnee or his short-lived career as boy mayor.

At first, Leslie lost the election – by a mere 21 votes. But there was a recount, and then it was determined she’d actually won by 21 votes. Her acceptance speech was really love, and I felt weirdly proud of her. That’s the kind of show Parks and Rec is though, you root for the characters like you know them.

I loved the April and Andy subplot. April’s panic over possibly having deleted every single file in the office showed that she really does take her job and her new responsibilities seriously. If she didn’t, she wouldn’t have cared that she might get fired.

Andy trying to distract April from her worry was really sweet, and his cockamamie plans to run away and come up with new, fake identities was hilarious. I loved the moment at the end when April realized that almost all of Andy’s jobs had to do with law enforcement. I think Andy would make a great bumbling cop! I want to see this happen.

Also, it was hilarious that Donna got all the files back with one click, because Jerry (of course) deletes stuff all the time and she secretly had her own backup installed. Genius. I hope we continue to get more Donna next season.

There was so much to love about this episode, and I’m sure I’ll be watching it for a second time. I know right now the show is still on the bubble, and I’m obviously no pro with inside information, but I think it’ll be renewed. I’d be heartbroken if it wasn’t, but if (god forbid) this were the last episode, I think it would be going out on a good note. Now, head to the comments to tell me what you thought of it, and check out a list of some of my favorite quotes and moments: