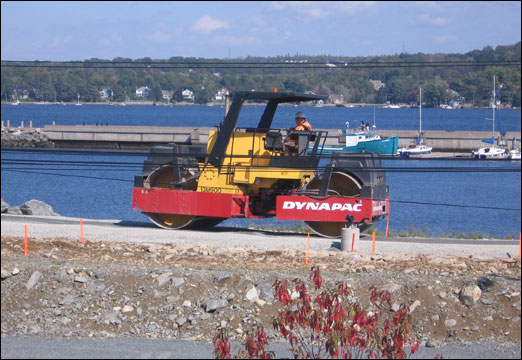 Paving has started along the Bedford Waterfront. The area outlined in the three plans encompasses the in-fill lands between the Bedford Highway and Bedford Basin, from the Boutiler Boatyard to the Clearwater Seafoods property.

The designs were presented by Rob LeBlanc, a planner with Ekistics. LeBlanc explained how some of the inspiration for the designs came from a public workshop that took place in April.

During that workshop, about 60 residents and stakeholders discussed and debated land-use options for the waterfront.

The three plans have many similarities. For example, they all include multi-use trails, extended boardwalks, parks, open space and marinas.

A ferry terminal, commuter rail considerations, and an iconic public building were also detailed in the plans. A library was suggested as an ideal iconic building because it would feature daily activity.

While the plans featured a mix of residential and retail space, there was less emphasis on office space because of the additional parking required. The plans also did not feature a hotel, which was suggested by some residents during the April workshop.

All three plans featured two entrance roads, one by Glenmont Avenue (by the Esquire Motel) and one by Clearwater Foods. Special emphasis was placed on maintaining green space around Moirs Pond.

Based in part on feedback from the meeting, as well as feedback in the weeks that followed, efforts will now be put toward establishing a master plan for the Bedford Waterfront. That plan is expected to be unveiled this fall.

Paving the way for the future
https://haligonia.ca/paving-the-way-for-the-future-6066/