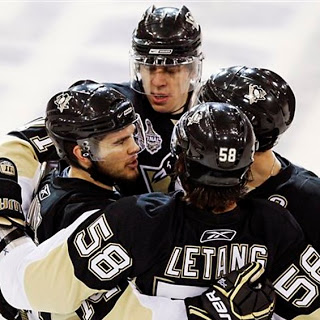 It was gut check time tonight for an aspiring stanley cup Penguins team that found out over the weekend they still had alot to learn about how to win hockey games in June. After being outplayed in nearly every facet of the game through 2 games in 24 hours over the weekend, Pittsburgh found themselves behind 2-1 in game 3 at Mellon Arena in front of a silenced crowd.
It seemed liek everything the pundits were saying was true; that Detroit is just too deep, too confident, and too savvy to beat. The Penguins had come out with energy and intensity, scoring the games first goal on a blast by Maxime Talbot, but it had not been enough. The series was officially on the line, and the Penguins were in trouble of being brushed aside once again by the mighty Detroit Red Wings.
Not tonight.
Kristopher Letang blasted one through the legs of Chris Osgood with 4 minutes left in the 1st period, on a shot that Osgood probably did not see thanks to Nicholas Cronwall, and Pittsburgh was back. Pittsburgh held on through a Detroit onslaught in the second period, being outshot 14-4, then scored on a power play goal by Sergei Gonchar midway through the 3rd period to take a lead they would not relinquish. Maxime Talbot added an empty netter to secure the victory, and we now have a series.
Pittsburgh got some lucky breaks no doubt, but they earned them by playing hard. The Pens outhit Detroit 36-17 and blocked seemingly dozens of shot in the waning minutes of the game.
Fleury was sensational, Maxime Talbot was everywhere, Matt Cooke brought alot of physicality, and Syd the Kid got his first point of the series. Game 4 goes Thursday night at 9:00 atlantic in Pittsburgh.
Chris Tremblay will be on Haligonia Sports this friday to give a full analysis of all the games played so far and a preview of the game on saturday night. Haligonia Sports on haligonia.ca!

Blue Jays Back On Track

Roy Halladay threw a complete game for his league leading 9th win of the season, and Alex Rios hit a solo shot to help the Jays beat L.A. 6-4. Halladay struck out 14 while giving up 7 hits. The Jays have now won 3 of 4 and are slowly recovering after that horrid 9 game losing streak in late may. Halladay gave up 4 runs in the 7th but Cito Gaston still stayed with his ace and allowed Halladay to finish the game. Do you think Cito respects the Doc much? How many managers would let their starter fight through a 4 run 7th inning en route to a complete game? I’d be willing to argue that Halladay is the only pitcher in baseball that gets that kind of respect.
Big win for the Jays….the Yanks, Red Sox, and Rays all won tonight as well. Hard to believe there are big games being played in June, but in a 4 team race, every game is important.