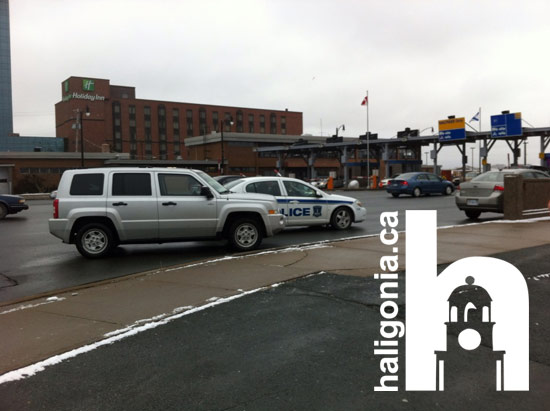 A 55-year-old Tatamagouche man was charged in relation to an incident
that occurred at the Metro Transit Bus Terminal in Dartmouth earlier
today.
At 10:30 a.m., police responded to the Metro Transit Bus Terminal on
Wyse Road in relation to a vehicle that reportedly struck two picketers
from the transit strike. The driver of the vehicle attempted to access
Wyse Road through a bus lane where the men were picketing.  The man
drove into the picketers with his vehicle and then fled the scene.
Officers were able to locate the vehicle not far from the incident.  The
two picketers, one aged 58 and the other aged 37, sustained minor
injuries and declined medical attention.
The driver of the vehicle was arrested and charged for assault with a
weapon and will appear in Dartmouth Provincial Court on March 20 to
answer to the charge.  A ticket was also issued for failing to remain at
the scene of an accident. The matter is still under investigation by
police.
Source: Release