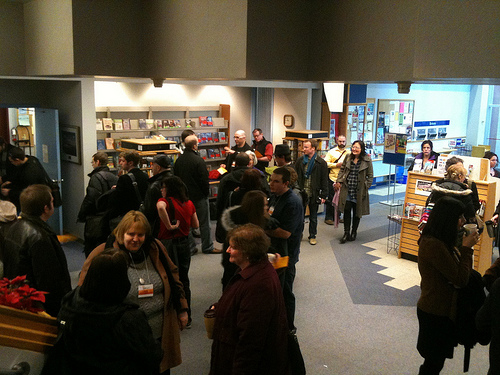 This is my third year attending the incorrectly named 'Halifax' Podcamp which has been held in Dartmouth and was founded by Ryan Deschamps, Jon McGinley and Craig Moore in 2009.

Glenn Canning wrote, “A Podcamp is meant to have an open, participatory, user-generated series of presentations, discussions, or workshops. The people who attend are the presenters. In typical unconference style, audience members are encouraged to make the most of the experience by following their interests and allowing the conversation to flow both in and outside of the presentations. ”

PodCamp is a gathering of social media enthusiasts, professionals, and anyone curious about what comes next in blogging, podcasting, video on the net, and so much more. It’s called an UnConference because the attendees themselves present the sessions, workshops, and panel discussions. This 'unconference' is incredible since most of the event is organized and staffed by volunteer. This year it was a leap forward with big name Julien Smith as keynote, something frowned up by the Podcamp doctrine. I had the benefit of seeing Julien last year and was excited to hear him again. New York Times bestselling author of Trust Agents and most recently the Flinch, download the Kindle edition here for free.

There is something so wonderful about being part of a grassroots event. People come from all walks of life all there because they really WANT to be there. Not because they are bought tickets by there company and sent out in to the frey to 'network', this is a group people who love social media. Content producers, avid readers, up and comers, voyuers, you name it. There are plenty of options, you can come to watch or you can sign up and present. Share a little of what you know with the masses.

Maybe I'll see some of you next year. Maybe I'll present next time. Maybe they will get the name right next year. Dartmouth Podcamp.

This Adopted Son of Dartmouth Speaks Up, you should too. Submit or respond to The D Side by contacting us at orlando@thedside.ca or follow us on twitter!