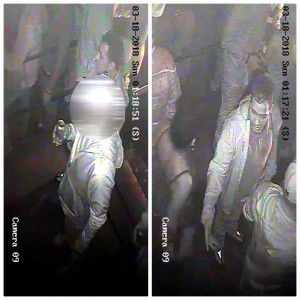 Police are asking for the public’s assistance to identify the man captured in video and photos in relation to the stabbings that occurred at The Toothy Moose on March 18.

Police responded to The Toothy Moose, 1661 Argyle Street, at 1 a.m. for a report of a man who had been stabbed inside the establishment. A 38-year-old man was transported to the hospital with non-life-threatening injuries and a 27-year-old man also suffered a minor stab wound during the incident. Later in the investigation police learned that a third man had also suffered stab wounds during the incident.

If you can identify the man in the photos and video please call police at 902-490-5020. Anonymous tips can be sent to Crime Stoppers by calling toll-free 1-800-222-TIPS (8477), submitting a secure web tip at www.crimestoppers.ns.ca or by using the P3 Tips app.