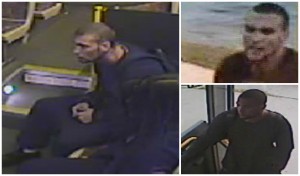 Police charge one man and release pictures of second suspect

Investigators in the General Investigation Section of the Integrated Criminal Investigation Division are seeking the public’s assistance to identify a man involved in a robbery in Dartmouth two weeks ago.

On August 6 at approximately 8:30 p.m., a 46-year-old man reported he was on a Halifax Transit bus on Pinecrest Drive in Dartmouth when he got into an argument with two other men. The victim was pushed off the bus by the men and assaulted. During the incident, the victim’s duffle bag fell to the ground and one of the suspects took his wallet which contained a quantity if cash. The victim was taken by EHS to the hospital for treatment of non-life threatening injuries and later released.

On August 11, while patrolling the area of Primrose Street in Dartmouth, officers observed one of the suspects from this incident. At 10:49 a.m., officers arrested a 32-year-old Dartmouth man for assault causing bodily harm. He was taken into custody without incident and is scheduled to appear in Dartmouth Provincial Court on September 20, 2016 to face this charge.

Police are still looking to identify the second suspect in this incident who is described as a white man with a slim build. At the time of the incident, he was wearing a dark long-sleeved shirt, dark pants and carrying a backpack.

Investigators are asking anyone who can identify the suspect and/or who has any information on this incident to contact police by calling 902-490-5020. Anonymous tips can be sent to Crime Stoppers by calling toll-free 1-800-222-TIPS (8477), submitting a secure web tip at www.crimestoppers.ns.ca or texting a tip – Tip 202 + your message to 274637.