Halifax RCMP/HRP Integrated GIS are releasing photos of a suspect in the robbery that occurred in Tantallon last Sunday.

On May 4th at 6:38 p.m., Tantallon RCMP responded to a robbery at Lawton’s Drugs Store on St.

Margaret’s Bay Road. A lone male suspect entered the store and threatened a female employee with a syringe/needle. He demanded that she hand over prescription drugs. The employee complied and the suspect fled the store. A police service dog assisted the officers but the man could not be located. Police believe the man got into a car. No one was injured.

The matter remains under investigation by the RCMP/HRP Integrated GIS Unit. 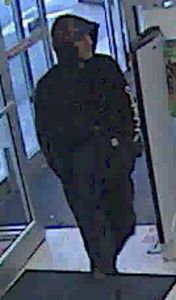